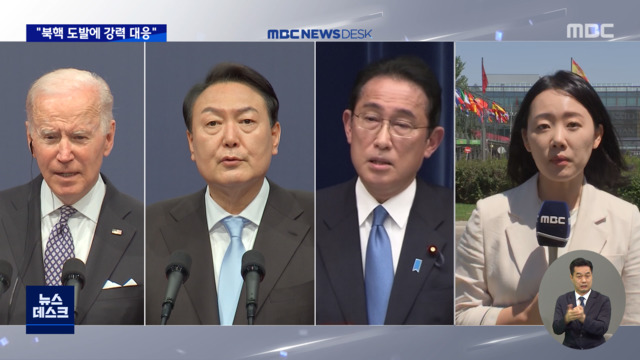 The leaders of South Korea, the US and Japan, who are visiting Madrid, Spain to attend the NATO summit, are set to hold a meeting shortly.

It’s been 4 years and 9 months since the three leaders met like this, but let’s find out what kind of story will come and go by connecting reporters who are at the scene.

Reporter Lee Jeong-eun, the meeting will be held in two hours, and the North Korean nuclear issue is expected to be mainly discussed?

Yes, as the possibility of North Korea’s nuclear test has increased, the leaders of the three countries are discussing the urgent need to respond to the North Korean nuclear issue.

“President Yoon will respond strongly to provocations, but will propose to work closely together so that North Korea can return to dialogue,” the office said.

We are also planning to discuss ways to increase the ‘level of security cooperation between the three countries’, which is something that North Korea has been very sensitive to.

However, since the duration of the summit is rather short (25 minutes), it is expected that they will confirm a consensus on responding to the North Korean nuclear issue rather than drawing specific agreements.

A little while ago, at 7 o’clock, the heads of four countries, Korea, Japan, Australia, and New Zealand, invited to NATO met and greeted each other.

As Korea-Japan relations are strained, interest is also focused on what the two leaders will talk about.

Have you already had a first meeting and a conversation?

Yes, a banquet was held this morning in Korea time, hosted by the King of Spain, with the husband and wife.

At this meeting, President Yoon and Japanese Prime Minister Fumio Kishida met and talked for about 3-4 minutes.

First of all, there were talks about local elections in Korea and the elections of the House of Councilors in Japan.

President Yoon said, “I have plans to move forward in a future-oriented way by resolving issues between Korea and Japan as soon as possible.”

They exchanged a principled position to try to improve relations without directly mentioning sensitive issues such as compensation for Japanese military comfort women and forced labor.

It is interpreted that the leaders of South Korea and Japan were cautious about the issue of past history, which could worsen domestic public opinion.

After the Korea-U.S.-Japan summit, a NATO summit will be held.

President Yoon is also going to give a three-minute speech here?

Yes, I am speaking with the content that Korea also agrees with the solidarity of values ​​and norms of defending liberal democracy, human rights, and the rule of law.

NATO will adopt ‘China’s challenge’ as a new strategic concept this time, and it is expected that Russia will also discuss the threat to global security.

While emphasizing that President Yun’s attendance at the NATO meeting cannot be viewed as an anti-China/anti-Russian move, the presidential office is closely monitoring how China and Russia will react.

Separately, this morning, the meeting between President Yoon and NATO Secretary-General Jens Stoltenberg was abruptly postponed.

After waiting for over 30 minutes at the meeting place, President Yoon turned around after receiving a call saying it was difficult to meet him.

The presidential office said it was a common occurrence on the stage of multilateral diplomacy, and said that they had scheduled another meeting just before leaving for Korea tomorrow.

So far, this is Lee Jung-eun from MBC News in Madrid, Spain.

I will not speak ill of the Kuomintang and Xie Fuhong! Zhong Dongjin is afraid of leaving the party election: there is no turning back | Politics | Sanli News Network SETN.COM