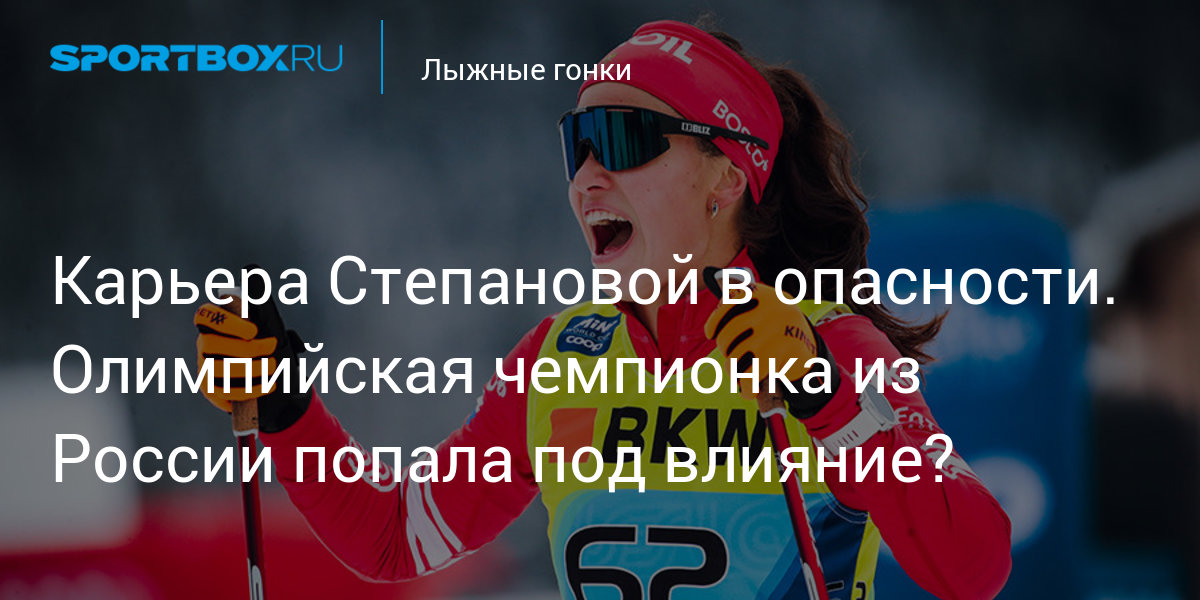 Elena Vyalbe is sure that an outsider is behind the ambiguous behavior of the skier.

In the midst of the Russian cross-country skiing championship, not only its participants, but also Veronika Stepanova shine on specialized TV channels and in social network groups. The opening of this season behaves so powerfully in the information space that her fame reached Syktyvkar, where the athlete herself did not come.

Despite the victories of Bolshunov and Nepryaeva in the capital of Komi, the president of our Federation, Elena Vyalbe, is also forced to answer questions about the 21-year-old skier. Moreover, the more Elena Valeryevna tells, the more uncertainty appears around our athlete and her image in the media.

It seems that Stepanova’s just beginning career is in danger.

“The man who pushes her to everything”

Stepanova and social networks is a unique story for our country. Athletes from cyclic sports practically do not engage in their PR, preferring to focus on sports. If one of them manages to get to a good manager, then this is considered a great success and allows you to count on a comfortable future even without official starts.

Veronica in this sense is out of the general trends. She confidently churns out post after post, playing on disturbing themes for her readers. The frequency with which the thoughts of a Kamchadalka fly into the Internet quote pads is surprising. Without going to her next start (Russian championship), the Olympic champion continues to increase her media weight.

The resonance that the skier causes makes her respect not only for her sporting achievements. However, after the statements of Elena Vyalbe, doubts arose, but is Veronika so independent in what she does?

– I’m sure that not all of this is her personal words. I know where the legs come from. I do not welcome such a large amount of being in social networks. I understand and welcome that after the Olympics you need to go to all sorts of programs. But everything should have its own measure. Veronica doesn’t know her yet. I hope that the person who encourages her to all this … He is very smart and mature, so I hope he will direct her in the right direction at the right time, ”Sport 24 quotes Vyalbe.

The unconditional trust that Vyalba enjoys in Russian sports makes you worry about her words. If this is true, then Stepanova’s career is in danger.

Stepanova has her own opinion on everything

However, it is foolish to hope that Veronica will change her attitude to the current situation. Its absolute advantage on the track – the lack of fear of authorities and sports arrogance – in ordinary life can lead to negative consequences. Judging by the comments on the news about Stepanova, people’s attitude towards her is gradually changing from “well done, brave girl, not afraid to say what she thinks” to “how many of her, in every barrel a plug.” Everyone who breaks into the information space with a stream of fresh wind goes this way. And here it is important not to play too much, not to get bored and, most importantly, not to forget that the fans, first of all, expect high results from you on the track and medals, including in individual races.

One way or another, but after the victory in Beijing, Veronika no longer gives reasons to admire her sporting successes. And it’s worrisome. And if Vyalbe hopes for the “patron” of the skier, then the fans are primarily waiting for help for Nika from Elena Valeryevna herself. She has saved more than one career. So I want to believe that even now Vyalbe will find the right words for the ward, and we will admire Stepanova’s performances on the track for many years.

Open the information about the 8 covids, hybrid species. Which species should be the most careful and concerned?