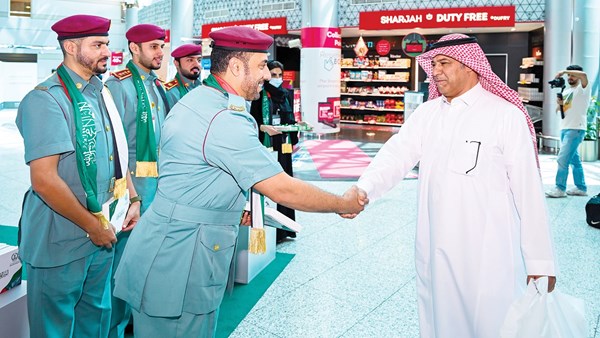 The Sharjah Police General Command received the brothers from the Kingdom of Saudi Arabia who are coming to the country through Sharjah International Airport, with gifts and greeting cards, in celebration of the Saudi National Day, which falls on September 23 of each year, in a sincere expression of the depth of brotherly feelings that unite the two brotherly countries and peoples. ?
Lt. Col. Mohammed Al Dhahouri, Head of the Public Relations Department at Sharjah Police, stressed the police’s keenness to translate the feelings and fraternal ties between the two brotherly peoples on this important day for every Emirati, as it reflects unity and a common destiny. The close and deep relations between the United Arab Emirates and the Kingdom of Saudi Arabia have become a model for inter-state relations.
The reception was well received by travelers from the Kingdom of Saudi Arabia, expressing their happiness and appreciation for the manifestations of the celebration with which the sister Emirates participate in celebrating the Saudi National Day, and for this generous gesture by Sharjah Police staff.

Sharjah: «Gulf»
Brigadier Abdullah Mubarak bin Amer, Deputy Commander-in-Chief of Sharjah Police, stressed the importance of clear future security visions and plans, which raise the performance and readiness of the security sector in various fields, in order to achieve its goals consistent with the strategy of the Ministry of Interior, which aims to enhance security and safety, and ensure readiness and readiness in face events.

This came during his inspection tour, to see the mechanism of workflow in the Special Tasks Department, within the annual inspection system for police departments, which aims to identify the latest developments in security and police work. In the presence of Colonel Ashour Sabt Bin Ashour, Director of the Special Tasks Department, and Colonel Tariq Al Midfa, Director of Strategy and Performance Development.

The tour began with an inspection of the military queue, followed by the inspection of vehicles, mechanisms, weapons, military equipment, and advanced devices used by the Special Tasks Department in performing its field tasks, as well as technical and tactical equipment and techniques used in the areas of police and security work.

Bin Amer was briefed on the achievements of the Special Tasks Department and the initiatives that it implemented during the past year, and listened to a detailed explanation of the projects and training programs for employees and the tasks assigned to them, and the management’s plans for the current year 2022. Including a vehicle of mobile equipment and supplies, shooting systems in complete darkness, and the innovative bulletproof bag.

The visit concluded with a meeting chaired by Bin Amer, in which he was briefed on a presentation of the performance indicators for the management of special tasks during the year 2021-2022, the development projects of the administration and the best international practices, to ensure readiness and readiness. Towards excellence, leadership, readiness and readiness, and praised the efforts of the Special Tasks Department in the field of enhancing security and safety in the Emirate of Sharjah, directing the continuity to do more, to enhance security and stability in the Emirate of Sharjah.

Brigadier Abdullah Mubarak bin Amer, Deputy Commander-in-Chief of Sharjah Police, inspected the Comprehensive Industrial Police Station, within the implementation of the annual inspection system for comprehensive police departments and stations, and to determine the workflow plans, in line with the strategic objectives of the Ministry of Interior, aimed at enhancing security and safety, and effectively enhancing public confidence. Services provided.

Brigadier Abdullah Mubarak bin Amer began his inspection tour by reviewing the police services provided by the center to customers, especially the smart services that keep pace with the developments of the leadership in its various security fields, stressing the keenness of the Sharjah Police General Command to provide the best services to the public, in accordance with standards of quality, efficiency and effectiveness.

He also inspected the offices of the Center’s branches, and was acquainted with the needs and requirements on the ground that support the readiness to perform the various tasks, and he was briefed on the achievements of the Center and the initiatives it implemented during the past year, listening to a detailed explanation about the projects, strategic plans and initiatives that will be achieved during the current year 2022, and the tour included a discussion To highlight the most prominent challenges and opportunities that support the leadership’s direction towards excellence.

The Deputy Commander-in-Chief of Sharjah Police stressed the importance of preparing clear security visions and future plans that raise the performance and readiness of the security sector, especially the services sector provided to the public and those dealing with the leadership, in line with the UAE’s strategy to foresee the future, calling on all employees of the center to harness their experiences and expertise in reality. Practical, which is reflected in enhancing the quality of life in the UAE society.

At the conclusion of the inspection tour, the Deputy Commander-in-Chief of Sharjah Police expressed his thanks and appreciation to the Comprehensive Industrial Police Station for its efforts and achievements during the last stage.

Lubna killed in car, heartbroken loved ones; Why was that? | Murder | Arrest

Sharjah: A young Jordanian engineer, Lubna Mansour, was stabbed to death in Sharjah yesterday. The woman was killed in an attack inside her car on Friday afternoon. Sharjah police said the suspect was arrested within two hours of the murder. If convicted of murder, he faces up to the death penalty.

‘A part of my heart has left me’

The Jordanian media reported that the accused was the husband of Lubna Mansour, but police did not respond or confirm this. On social media, Lubna’s family continues to pay homage by adding their picture.

“A part of my heart left me,” Lubna’s sister Lias Mansour wrote on social media. ‘Sister, you are in the best place. I love you Lubna ‘- she tweeted. Hundreds of people are paying tribute to Lubna.

Lubna was stabbed multiple times in the body. Sharjah Police CID chief Colonel Faisal bin Nasser said it was clear from the CCTV footage that the accused was driving with the same car after being stabbed inside the car. Officers were able to quickly locate Lubna’s car as it was abandoned near the beach. Lubna’s body was also found inside the car.

Police have not released the age or citizenship of the accused. According to police, the defendant testified that a dispute between him and Lubna led to the murder. It was clarified that the case has been handed over to the Public Prosecution and the investigation is continuing. Lubna recently graduated with a degree in engineering from the Jordanian University of Science and Technology.

The General Command of Sharjah Police confirmed the success of its comprehensive security plan, which it implemented during the Eid Al-Fitr holiday in all cities of the Emirate of Sharjah, which reflected the extent of the strategic efficiency with which all the competent leadership authorities and strategic partners dealt.

Colonel Jassim bin Hadda Al Suwaidi, Director of Operations Department at Sharjah Police, said that the efforts made by the various work teams on mosques, commercial centers and parks helped the success of the plan drawn up to establish security and safety and enhance the quality of life during the blessed Eid Al-Fitr holiday.

He revealed that the Operations Room and Call Center in Sharjah Police received 42,042 phone calls across the emirate during the period from April 29 to May 8, including 39,008 phone calls via the 999 number designated for emergency cases, while it received 3034 non-emergency calls on the 901 number, which included general inquiries. and police services provided.

He pointed out that all incoming calls, reports and inquiries were dealt with promptly after being evaluated by the first responder with the aim of ensuring the speed of movement to the communication site, in coordination with other police departments within the scope of reducing response time.

For his part, Lt. Col. Omar Boghanim, Deputy Director of the Traffic and Patrols Department at Sharjah Police, confirmed the success of the traffic plan developed and implemented by the department during the Eid holiday, with the participation of various units in Sharjah Police.

He pointed out that the awareness and commitment of vehicle drivers and road users to traffic safety procedures and their adherence to them helped the traffic plan succeed and the number of accidents decreased, which amounted to two accidents that resulted in severe injuries during the Eid holiday, despite the heavy traffic on the streets and internal and external roads.

He explained that the administration took all measures according to the plan prepared to ensure traffic safety, which constituted the success factor that was achieved in achieving “zero” deaths, praising at the same time the efforts made by all employees of the administration and all police units in Sharjah Police during the days of the Eid holiday, which had a great impact. In the smooth and smooth flow of traffic and in a manner that meets the aspirations of Sharjah Police.

Sharjah: The CID has nabbed a 12-member Asian gang who were selling gold-plated metal pieces under the false pretense of real gold. He was arrested after receiving several complaints.

CID Director Col. Omar Ahmed Abu Al Saud said the strategy was to establish trust with traders in the markets and gain credibility by offering low – cost mobile phones. He then shows the gold and says that if in doubt he can check at the jewelers.

The investigation was intensified after the fraudsters informed the police. Defendants pleaded guilty when apprehended by CID officers who monitored the movements and pursued them. The gold-plated pieces of metal were brought into the country with the help of some foreigners.

Fraud information can be reported

Police advised not to interact with unknowns and unlicensed persons. Do not trust fraudsters when there are trading companies in the country that get the best gold. Information about them can be reported to the public. Phone: 80040, Sharjah Police Complaints can be lodged through the app and on the website. Site: www.shjpolice.gov.ae.