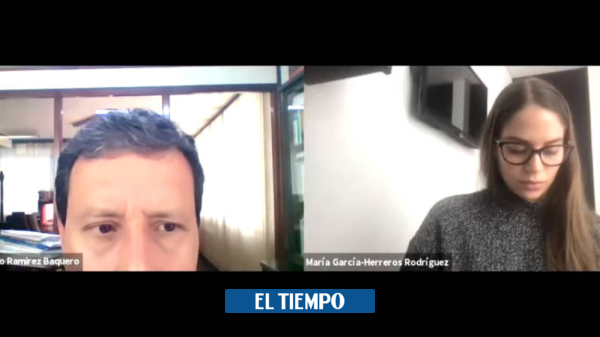 There are indignation among the community of the Rosario University, well a teacher took a student out of his virtual classroom, which had as a profile picture an image referring to the national strike.

Apparently the teacher Edgar Augusto Ramirez He was against the young woman’s position in the face of the country’s situation and that is why she acted in such a way.

“There you with your personal inclinations and with your things, that does not concern this class”said the professor when asking the young woman to leave.

In the video, in addition, you can see how he repeats “go show yourself out there, but not here. Take that away from me now, don’t you understand? ”As his voice rose.

The teacher too critical the decisions that Mayor Claudia López has made in the face of various events, such as the current marches and those that occurred at the beginning of the pandemic. “There are the consequences, the offender has a mayor to protect him”, he mentioned.

Another student posted a video in which Ramírez refers to the president with derogatory comments: “Call that vital mass whatever you want to call it. That lady, or whatever she is, has completely demotivated the police authority in this city (Bogotá) ”.

For its part, Alejandro cheyne, rector of the University, shared through his social networks an official statement in which the position of the institution regarding what happened is made clear.

“It is unacceptable. We reiterate the message of our institutional communiqué to promote respect for diversity and foster spaces for dialogue on the challenges of Colombia ”, said the institution.

(What’s more: What do the great figures of the spectacle say about the protests?).

María Camila Guerrero, the law student who was a victim in this incident posted the photo which sparked discord, after netizens asked for it.

It was an image with the inscription: “How difficult to study while my people are being killed.”

After the situation that the young woman lived through, several student groups have come together to ask their faculties to allow them to go out and protest without influencing their academic process.