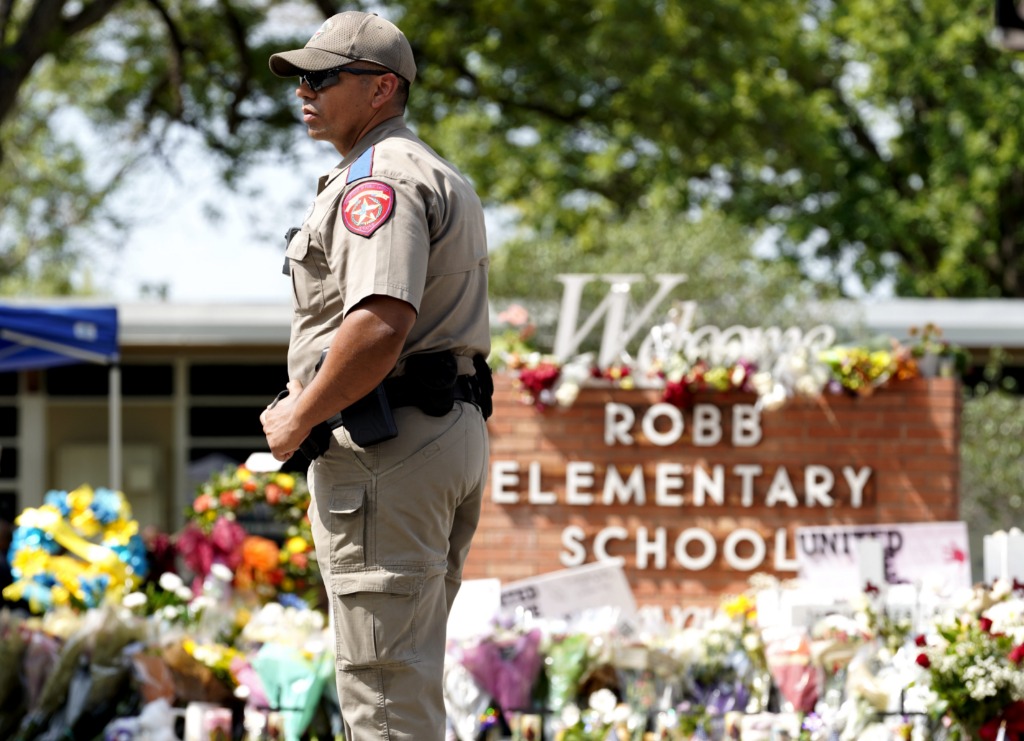 BEIJING, May 30 (Xinhua) — The U.S. Department of Justice said on the 29th that it will review law enforcement’s response to the Texas elementary school shooting. According to the Associated Press, such scrutiny is rare, and is usually done by local law enforcement or a third party after a mass shooting.

A vicious shooting at Rob Elementary School in Uvalde, Texas, on the 24th killed 19 fourth-graders and two female teachers. Law enforcement officers killed the gunman nearly an hour and a half after he entered the school.

On May 27, police officers were on duty outside the elementary school where a shooting occurred in Uvalde, southern Texas.Photo by Xinhua News Agency reporter Wu Xiaoling

He said in a statement that the purpose of the review is to produce an independent report on the 24th law enforcement operation to draw lessons and best practices to help first responders better prepare and respond to “active shooter” incidents.

In this shooting incident, 18-year-old local high school student Salvador Ramos broke into the elementary school with a semi-automatic rifle and shot and killed teachers and students. He was finally shot and killed by a border patrol SWAT. After the shooting, the news released by the police was inconsistent and even contradictory.

The schedule given by the Texas Department of Public Safety on the 27th shows that in the nearly 50 minutes before the gunman was killed, 19 law enforcement officers were on standby in the school corridor. During the period, children in the same classroom as the gunman called for help at least 8 times.

On May 27, in Uvalde, Texas, the United States, the public safety department held a news conference outside the elementary school where the shooting occurred.Photo by Xinhua News Agency reporter Wu Xiaoling

The Texas Department of Public Safety official said the officers on the scene believed that the gunman had been trapped in the classroom and would not cause injuries to teachers and students elsewhere on the campus. “In hindsight, this was the wrong decision.”

As the survivors spoke out and more details of the case were disclosed, the mood of the public turned from sadness to anger, asking why the police did not act in the first place? Could some children be rescued in time if they acted quickly? Who is responsible for this?

U.S. President Joseph Biden and his wife went to Uvaldi on the 29th to condolence to community residents. He met in private with the families of the victims in a church. As he walked out of the church, about 100 people shouted at him: “Do something!” He replied, “We will.” It was his only public statement on the trip.

People mourn the victims of the shooting in Uvalde, Texas, on May 26.Photo by Xinhua News Agency reporter Wu Xiaoling

Citizen Mackenzie Hinojosa is the cousin of a dead schoolboy. She told The Associated Press that she hoped Biden’s trip “was not just about mourning.” “We wanted change, we wanted action. It happened again and again. Mass shootings happened, it was on the news, people cried. And then it’s gone, Nobody cares. It happens again and again.”

According to media reports, the gunman purchased a gun locally on May 17 and 20, when he was just 18 years old.

In 2012, a shooting at Sandy Hook Elementary School in Connecticut killed 20 children and six adults, making it the deadliest elementary school shooting in the United States. (Guo Qian)

Xinhua News Agency, Beijing, May 29 (Xinhua) It has been four days since the Texas elementary school shooting that shocked the United States. On the 28th, in Uvalde, Texas, where the shooting occurred, residents mourned the 21 dead in the city center. As the survivors spoke out and more details of the case were disclosed, the mood of the public changed from sadness to anger, and the focus of the investigation of the case also turned to the inaction of the police at that time.

The city of Uvaldi has about 16,000 residents. After the shooting, 21 crosses were erected around a fountain in the urban area. Flowers, balloons and plush toys were placed around the pool. Children wrote their words to the deceased with chalk on the roadside.

On May 28, citizens mourn the victims of a shooting incident in a city square in Uvalde, southern Texas, United States.Photo by Xinhua News Agency reporter Wu Xiaoling

According to media reports, most of the 19 students killed in the shooting were 10-year-olds, and two female teachers were in their 40s.

“Strong, Uvaldi” slogans can be seen in local shop windows and lawns.

A pro-gun ethos prevails in Uvaldi. The AR-15 semi-automatic rifle used by the 18-year-old suspect was purchased at a local gun store. After the shooting, the gun shop was temporarily closed to pay tribute to the deceased.

On May 28, citizens mourn the victims of a shooting incident in a city square in Uvalde, southern Texas, United States.Photo by Xinhua News Agency reporter Wu Xiaoling

“How can people sell a gun like that to an 18-year-old?” asked the media of two parents of the children who were killed. One of them called for more background checks on gun buyers.

Local pastor Joe Ruiz said that these days, people have been crying dry, and they are now exhausted and need to rest.

The city of Uvaldi is economically underdeveloped. Locals used to grow vegetables and corn for a living, but with mechanized farming replacing many agricultural jobs, building materials companies have become popular employers. Roosters can be seen pacing the potholes near Rob Elementary School, where the shooting took place. Before the 24th, the occasional traffic accident was considered a major case in the local area.

Uvaldi is about 80 kilometers from the U.S.-Mexico border, where a border patrol is stationed to manage a highway checkpoint and monitor freight trains. On the 24th, it was a border patrol SWAT who killed the gunman.

After the shooting, the information given by the police was inconsistent or even contradictory. People focus on multiple focuses, such as why the police did not act in the first place; whether some children could have been shot and killed if they acted quickly; who is to blame. Calls for an independent inquiry into police inaction are growing.

On May 27, police officers were on duty outside the elementary school where a shooting occurred in Uvalde, southern Texas.Photo by Xinhua News Agency reporter Wu Xiaoling

Steve McGraw, director of the Texas Department of Public Safety, gave a timeline of the shooting process on the 27th, showing that the gunman broke into the elementary school for nearly an hour and a half before he was killed. In the nearly 50 minutes before he was shot, children who were trapped in the same classroom as him called for help at least eight times.

McGraw said the police officer in charge of the school district, Pete Arredondo, believed that the gunman was trapped in a classroom and would not injure teachers and students elsewhere in the school, and asked all law enforcement officers to wait for support. “In hindsight, it was the wrong decision.”

According to media reports, other law enforcement officials had requested to enter the classroom to save people, but Arredondo refused.

“If law enforcement had acted right away, some of the children might have been saved instead of dying from blood loss,” one law enforcement official said. “It’s heartbreaking.”

On May 27, a man lays a bouquet outside the elementary school where the shooting took place in Uvalde, southern Texas.Photo by Xinhua News Agency reporter Wu Xiaoling

Texas Governor Greg Abbott praised local police officers for their bravery in saving lives at a news conference. He said on the 27th that he was “very angry” for the police’s performance at the time, and he promised to investigate the incident.

Maria Huberfield, a professor at the John Jay College of Criminal Justice in the United States, said there will be a rigorous investigation into whether police officers are acting in accordance with police policies, procedures and training.

Following a trip to Buffalo, New York, on the 17th to condolence to the residents of the place where the shooting occurred, US President Joseph Biden will go to Uvaldy on the 29th.

An 18-year-old white gunman opened fire inside and outside a supermarket in Buffalo on the 14th, killing 10 people and injuring 3 others, 11 of whom were of African descent. (Guo Qian)

Original title: Texas shooting police failed to respond to the US Department of Justice to intervene in the review

“Playing soccer when I was a girl was activism”

Are public sector employees allowed to engage in business or work in the private sector? .. “Human Resources” answers