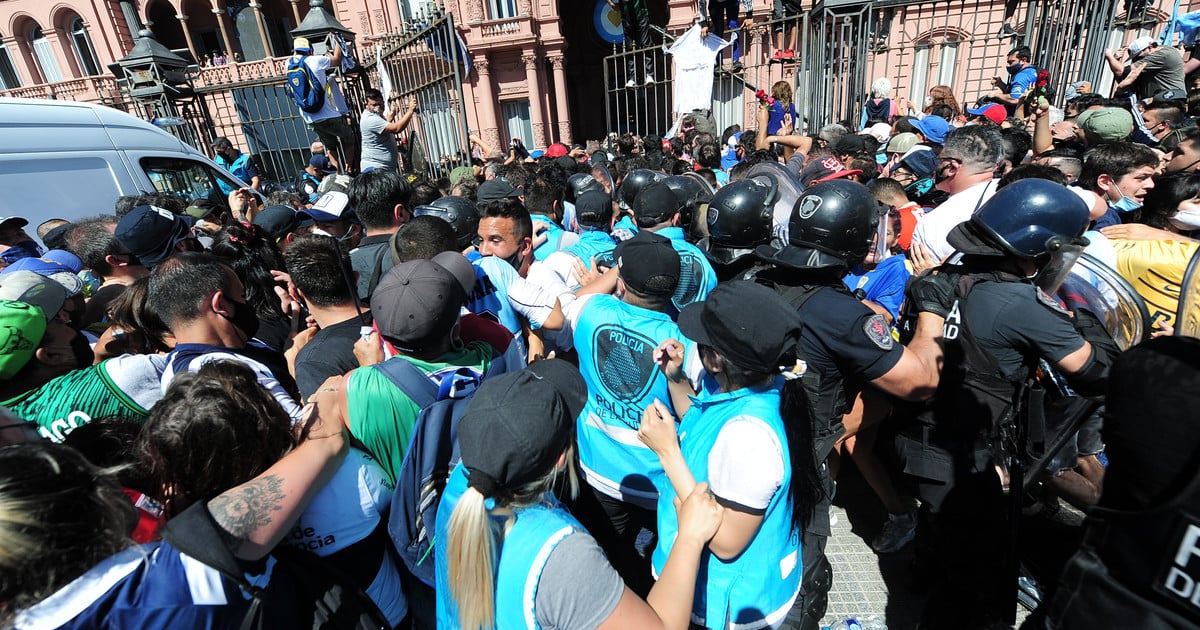 What started with cross accusations when still the coffin of Diego Armando Maradona was in the Casa Rosada, in the midst of the massive wake that led to a scene of chaos and violence, now it was translated into a criminal complaint.

In the complaint, which was presented, it is requested that the highest authorities of the City Government be investigated for the crimes of public intimidation, abuse of authority and abandonment of person (Articles 211, 248 and 106 of the Penal Code) “due to the violent actions carried out by police officers,” said the aforementioned secretariat in a statement.

The presentation includes a compilation of images “that prove the violent and excessive repression”added the sources. The letter indicates that these images gathered “do not allow us to suppose that the police abuses were individual deviations of some members of the Buenos Aires force.”

“This popular farewell had been developing in a calm and orderly manner until, around 2:00 pm, the Police of the City of Buenos Aires intervened, carrying out an operation to abruptly cut off the flow of the line, upsetting people who had not yet could enter. That cut occurred at the height of Avenida 9 de Julio and Avenida de Mayo, and thousands of people they saw their intentions to fire Maradona frustrated“says the presentation.

Pietragalla, ex-deputy and member of La Cámpora, brand that “before the first signs of annoyance of the people who were prevented from advancing in line, several units of the City Police suddenly burst into motorcycles and hydrant trucks that sThey joined in to suppress and violently detain people –Many fathers and mothers with children- whose only intention was to say goodbye to Diego “.

The National Human Rights Secretariat filed a criminal complaint against the City Government authorities for the brutal repression carried out by the Buenos Aires police during Maradona’s wake at Casa Rosada. pic.twitter.com/lGyy24DHiL

“The police action, which can be seen in the videos that accompany this complaint, caused runs to the south of the city. There were also people who ran north and even west, in the direction of the National Congress,” he describes .

“The systematicity in the actions and the violence committed by all of them realizes a higher order that ordered the repression in this way: with rubber bullets, gases, fire hydrants and arbitrary arrests ”, he adds.

In addition, the complaint clarifies that the National Government did not give any order to repress or clear or detain any person and makes the police forces of the Government of the City of Buenos Aires directly responsible.

The City police detained 11 people allegedly accused of “resisting authority,” of which nine have already been released.

The person who started the cycle of accusations between each other It was the Minister of the Interior, Wado de Pedro, who published a Twitter message in the middle of the incidents at Maradona’s wake.

“We demand @horaciorlarreta and @diegosantilli to stop this madness being carried out by the City Police. This popular tribute cannot end in repression and bullfights for those who come to fire Maradona, “he said.

We demand from @horaciorlarreta Y @diegosantilli to stop this madness being carried out by the City Police. This popular tribute cannot end in repression and bullfights to those who come to fire Maradona.

Responses to De Pedro’s tweet were not long in coming. The senator of Together for Change Martin Lousteau was one of them and even posted the government statement, where assumed the organization of the wake.

Then it was Santilli’s own turn: “We do not organize the wake and we work in Avenida de Mayo on July 9 and the Federal Police in Casa Rosada. “

And he added that from the City they have “the filming of July 9 and show that the line was interrupted, the pressure of the violent on the Police, injuring 11 policemen plus a journalistto. They threw stones, sticks, attacking the Police“.

A while before, Frederic had said that “Santilli knows perfectly that the order to cut the queue on Avenida de Mayo did not exist because we were evaluating the way forward“.

Frederic also said that “the decision was that there should be no repression” and that Santilli insisted “that there was going to be pressure on the Casa Rosada.” “I told him to let people settle down, that it would be worse. The second time we spoke, they stopped the repression“, he asserted.

See Also:  An international site for COVID-19 statistics objected to the data of the positive cases from Argentina, considering that they do not meet the sufficient quality

The last to speak was the President himself who adjudicated the incidents to barrabravas but he also added to the criticism of the City and the Buenos Aires Police for what happened.

“I asked the Secretary for Human Rights (Horacio Pietragalla) to investigate. It seems to me that there was an excessive action by the City Police, it is very evident. I’ve seen a guy with a flag being thrown a rubber bullet six feet away, and the guy is standing with a flag. That is an incomprehensible thing. This violence is incomprehensible. But that in no way depended on us“, he asserted.