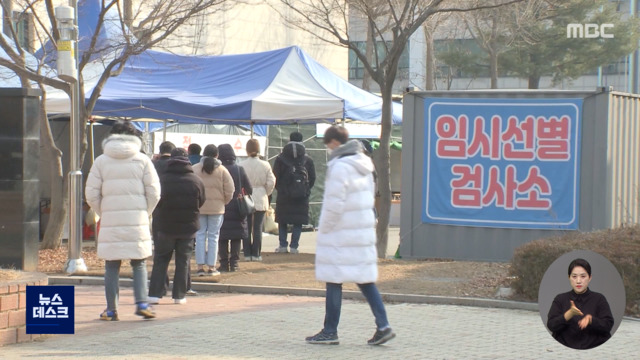 Compared to Monday, it is almost double in three days.

The number of confirmed cases being treated at home has also exceeded 40,000, and it is approaching the maximum capacity the government can manage.

The government has decided to increase the ability to respond to home treatment, but not to strengthen social distancing.

First of all, this is reporter Shin Jeong-yeon.

At the same time as the highest number of confirmed cases, it doubled from 7,000 in just three days.

“We expect that this rate of increase will be maintained for a while. And the period of increase could be 5 to 8 weeks…”

By region, the number of confirmed cases in the metropolitan area such as Seoul, Gyeonggi and Incheon accounted for 63.9% of the total and 36.1% from the non-metropolitan area.

We are already approaching the limit of response, accounting for 74% of the 58,000 people that can be afforded through managed medical institutions.

The government plans to increase management capacity by simplifying the monitoring of at-home caregivers as there are many asymptomatic and mild patients due to the nature of Omicron.

“We are working hard to build a system that not only expands home treatment medical institutions to expand their capabilities, but can also link treatment with local hospitals and clinics.”

At the same time, the government has announced that it will manage the Omicron epidemic without further strengthening social distancing.

Despite the rapid increase in the number of confirmed cases, it is judged that it is possible to cope with the current distance as the number of patients in critical condition is around 300 and the bed operation rate is 18.3%, which is a stable management situation.

This is Jeongyeon Shin from MBC News.

In the US state of Massachusetts: Doctors refuse to give anti-vaccination heart transplants