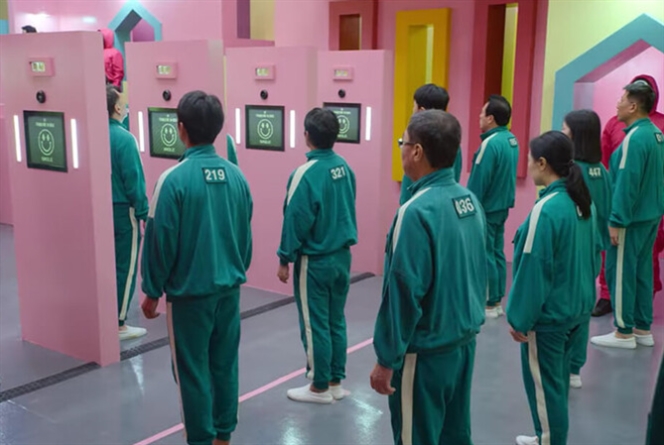 The US streaming platform, Netflix, recently launched auditions to choose people who will participate in a reality TV show inspired by the series. “The Squid Game” In South Korea, the participants compete in real games similar to those dealt with in the series, but of course without one of them being killed in the end.

The platform wrote, via a website created specifically to select participants in this competition, which will be called “Squid Game: The Challenge”: “The largest performance audition conducted within a reality TV category will lead to the selection of 456 actual competitors to participate in the games. Seeking $4.56 million that could change someone’s life.
The program’s authors are looking for “participants who speak English and come from any country in the world.”
The participant is required to meet a set of criteria, the most important of which is not to exceed twenty-one years of age and to be “available to participate in the program that is scheduled to be filmed within a maximum period of four weeks from the beginning of 2023”, in addition to being “able to travel to the various regions that will be filmed.” determine it.”
The platform’s announcement, which promises a “dazzling collection of games”, notes that “actual gamers will be immersed in the famous Squid Game world and never know what awaits them.”
This came after “Netflix” announced on Tuesday evening through the communication sites this news, which may have surprised many, as the participants in the series are gradually killed during the tests.
The series, which was considered a stinging critique of the excesses of the capitalist system, depicts characters from marginalized groups in South Korea who participate in traditional games for children with the aim of winning huge sums of money.
But “the worst that could happen” in the upcoming reality TV show “is the participant going home empty-handed,” according to “Netflix” on the website.
“Whether they win or lose, all players will come out unharmed,” the platform says in its announcement. But whoever wins will get a very large amount.”
This news was followed by the official announcement of a second part of the series. Its director, Huang Dong, had expected last April that he would not finish writing the script for the second part before the end of 2024.
Noting that the dramatic work, which involves significant violence, has been a global success and has become a societal phenomenon.