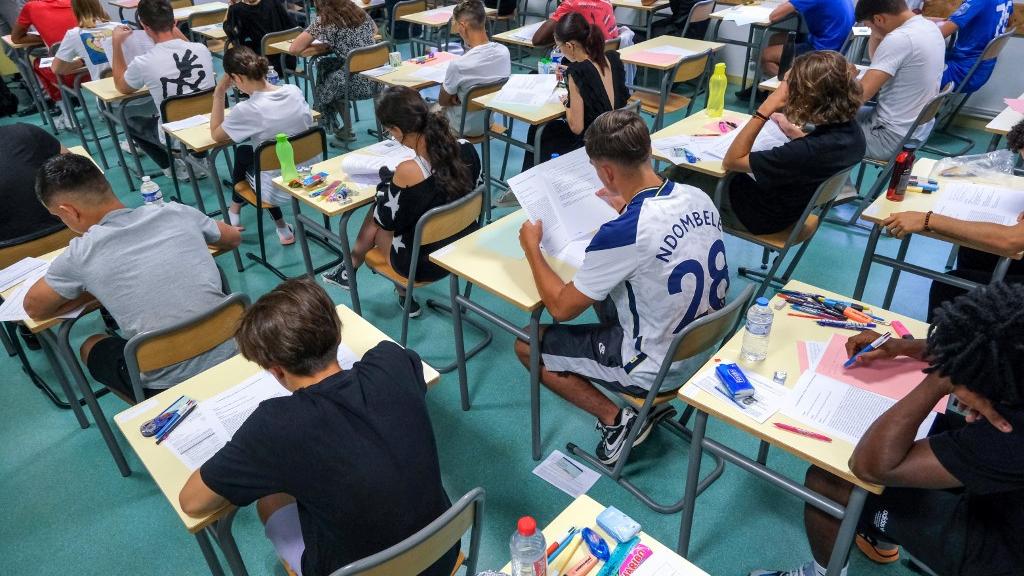 Find here all of our live #BAC

18h09 : Some 86% of the 709,000 candidates for the 2022 baccalaureate were accepted straight away, without having to take the catch-up, a rate down 4.7 points compared to that of the 2021 baccalaureate. At the start of the day, the Minister of Education Pap Ndiaye had explained that it was not “not entirely surprising” car “this year is the first real year of the baccalaureate reform that is not hampered by the health crisis”.

Wout van Aert wins the fourth stage between Dunkirk and Calais and consolidates its lead in the general classification, before facing the cobblestones tomorrow.

#POLITICS The Nupes groups (LFI, PS, EELV, PCF) will table and sign together a motion of censure against the government. We explain how this parliamentary tool works.

#COVID_19 The Minister of Health announced that the threshold of 200,000 positive cases in 24 hours would be crossed this eveningwith “an epidemic resurgence throughout the territory“.

The results are available since this morning, on the National Education website and on the franceinfo.fr platform. The success rate before catch-up is down 4.7 points, to 86%.

Two teachers were shot dead in Tarbesin the Hautes-Pyrénées, while the shooter is on the run. Here is what we know about this case.

18h00 : The success rate for the baccalaureate before resiting is down 4.7 points, to 86%, announced the Ministry of Education.

13h39 : Obviously, the emotion was strong in all the high schools of France, this morning, at the time of discovering the results of the examination, as noted by France 2.

13h10 : Bonjour @Louis, this information has not yet been given. But Pap Ndiaye, the Minister of Education, explained this morning during a trip to a high school in Champigny-sur-Marne (Val-de-Marne) that the first results “indicate a decrease from previous years”.

13h10 : Hello, what is the pass rate for the baccalaureate this year?

1:01 p.m. : Exam candidate results are available in our search engine, on this page.

#SOPHIE_LE_TAN Jean-Marc Reiser was sentenced to life with 22 years of security for the assassination of the Strasbourg student Sophie Le Tan, in 2018.

#SYRIA “France today proceeded to the return to the national territory of 35 French minors who were in the camps in northeastern Syria”as well as 16 mothers “from the same camps”announced the Ministry of Foreign Affairs.

#FIELDS Four mathematicians won the Fields Medal, including Frenchman Hugo Duminil-Copin, for his work on probability.

The results are available since this morning, on the National Education website and on the franceinfo.fr platform. Follow our live.

Two teachers were shot dead in Tarbesin the Hautes-Pyrénées, reports France 3 Occitania. The shooter is on the run, and his motives are currently unknown.

11h41 : I am a very happy granny 2 bins 2 mention. I congratulate all the students because the high school years were very complicated and they are suffering the plasters of this new baccalaureate! So BRAVO

11h41 : Hello Franceinfo, I am happy to announce that I obtained my baccalaureate with honors with Congratulations from the jury, with an average of more than 18 🥳

11:16 a.m. : The baccalaureate pass rate has exceeded 80% since 2012. Last year, nearly 94% of candidates passed the exam that gives access to higher education.

11:16 a.m. : “It thwarts those who said that the continuous control would give extraordinary results. The new baccalaureate remains an important examination”

Since its reform in 2019, the baccalaureate mark is based 40% on continuous assessment and 60% on final tests (written and oral French, passed in first class, philosophy, specialty tests and the grand oral , passed in terminal).

11:15 a.m. : The first trends in baccalaureate results “indicate a decline [des résultats] compared to previous years”announced the Minister of Education, Pap Ndiaye, during a trip to the Marx-Dormoy high school in Champigny-sur-Marne (Val-de-Marne).

10h58 : Congratulations Cat, and to all the winners. Courage to the disappointed, sure it will be better next year. Often a failure allows you to bounce back 🙂

10h56 : Yeah ! I have the baccalaureate! Yes! Mention very well in addition, so happy!😄

10h38 : The results of the Bac are online… except that the site is saturated… Grrrr

10h37 : The results are published for Versailles but impossible to access them via the site. Too many people…this waiting is killing me.

10h37 : Hello FI. A little word for all our new graduates including my daughter who gets a TB mention! Congratulations young people and good continuation! You are the best !

10h39 : The results keep coming in, but several of you are reporting connection issues on the National Education website, saturated. New or old graduates, do not hesitate to share your memories of discovering the results in this live.

09h17 : The results continue to fall: besides the academies already mentionedthose of Clermont-Ferrand, Dijon, Grenoble, Limoges, Créteil, Paris and Versailles now have the names of their graduates.

That’s it, the results of the baccalaureate are online for some academies (Nantes, Aix Marseille, Reunion, Guyana, Mayotte, Orleans-Tours and Reims)! You can consult them on the National Education website Or on the franceinfo.fr platform.

#POLITICS Emmanuel Macron meets this morning at the Elysée the members of the government concerned by the measures for purchasing power. Objective: to finalize the bill which must be presented Thursday in the Council of Ministers.

At least six people were killed and 26 injured in a shooting in the Chicago suburb of Highland Park yesterday during an American Independence Day parade. The shooter was arrested. Another shooting took place in Philadelphia, injuring two police officers.

08h55 : That’s it, the results of the baccalaureate are online for some academies (Nantes, Aix Marseille, Reunion, Guyana, Mayotte, Orleans-Tours and Reims)! You can consult them on the National Education website Or on the franceinfo.fr platform.

Admitted, remedied or failed? It’s D-Day for nearly 710,000 candidates for the new formula baccalaureate who will discover their results this morning. Follow our live and discover the results on our page.

At least six people were killed and 26 injured in a shooting in the Chicago suburb of Highland Park yesterday during an American Independence Day parade. The shooter was arrested.

Russian President Vladimir Putin ordered his forces to press ahead with their offensive in eastern Ukraine, while his Ukrainian counterpart Volodymyr Zelensky warned that repelling the invader would take time. “superhuman time and effort”.

Algeria celebrates with great pomp the 60th anniversary of its independence after 132 years of French colonization, the memory of which still strains its relations with Paris. Elise Lambert is interested in the delicate transmission of memory in families.