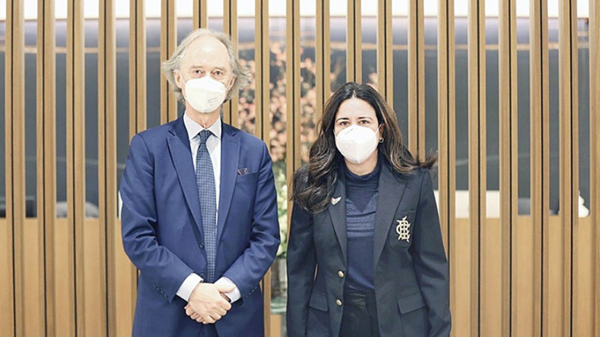 The United Arab Emirates called on the international community to crystallize a new approach in dealing with the Syrian crisis, with the aim of ending it peacefully and in a sustainable manner.
The UAE stressed, during a speech before the UN Security Council session devoted to studying the situation in Syria, that a political solution is the only way to end the Syrian crisis, and that making real progress in the political process requires all parties to make the necessary concessions and in good faith while seeking to build confidence in line with Security Council resolutions.
The UAE defended its strategy to resolve the Syrian crisis by opening channels of communication and building bridges with the Syrian government as a more successful way to resolve the protracted crises, stressing that the recent visit of His Highness Sheikh Abdullah bin Zayed Al Nahyan, Minister of Foreign Affairs and International Cooperation to Damascus was among the efforts towards building bridges. in the region.
The UAE also stressed the importance of strengthening and activating the Arab role in a manner consistent with the diplomatic efforts of the UN envoy to Syria, Geir Pedersen, which would contribute to making progress on the political track, hoping to end the crisis and restore security and stability to Syria and the region.
In its speech before the Security Council, the UAE stressed its agreement with the Special Envoy to Syria on the importance of creating opportunities through which gradual and tangible steps can be taken, which requires working together to support the activation of the Constitutional Committee, urging that current efforts focus on strengthening dialogue and overcoming the obstacles that caused the failure to reach an agreement. consensus on constitutional principles.
The UAE called for an end to foreign interference in Syrian affairs, stressing the importance of preserving Syria’s unity, independence and territorial integrity, calling for continuing efforts to combat terrorism in the country, which is one of the most threatening factors to stability and security in Syria and the region.
The UAE expressed its concern about ISIS’s continuing to launch its terrorist attacks, as happened recently in the “Gweran” neighborhood in Al-Hasakah Governorate, in addition to their continued targeting of Deir Ezzor and eastern Homs.
At the conclusion of her speech, the UAE expressed its hope that this year will be the year of ending the Syrian crisis, in a way that meets the aspirations of the Syrian people and provides them with a decent life in a safe and stable homeland.