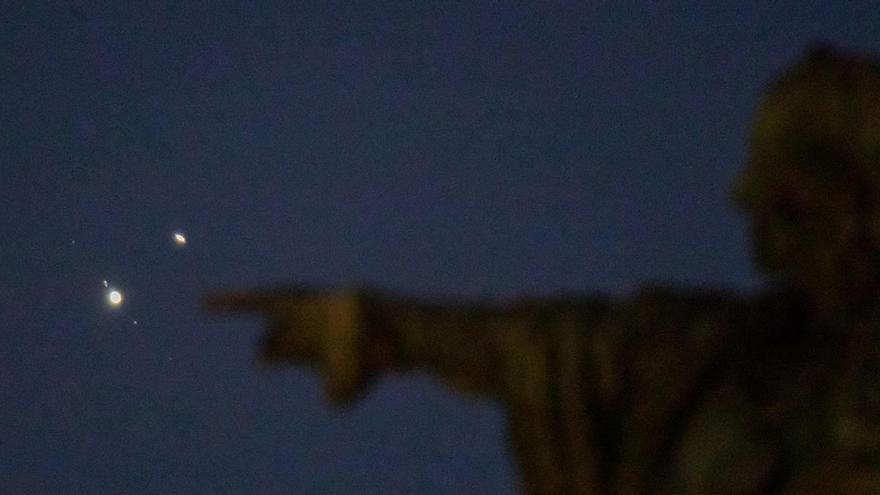 Starting at 5:25 p.m. on Monday afternoon the great event that astronomically closes 2020 has finally been glimpsed: the great conjunction of Jupiter and Saturn. The phenomenon popularly known as the ‘Belen star‘has been seen in its entirety just at sunset and for about an hour. Saturn has been positioned above Jupiter creating the optical effect that the two planets were united in one single bright point of light.

The astronomers explain that this spectacle, which has been visible this Monday with an intensity that has not been seen since 1623, It will not be seen again until 2080.

The great planetary conjunction has begun to be visible in countries of the northern hemisphere such as Japan, where at 10 in the morning (Spanish time) they have already been able to enjoy the rare astronomical phenomenon. A curiosity of the broadcast that they have done from the Asian country is that, for a moment, Jupiter has shown its satellites and a star has ‘sneaked’ in between the satellites and the planet, giving the feeling that it was also a satellite of the fifth planet of the solar system.

For the observation from our country, the Astronomical Federation has organized for all those who could not see it well from home or the place where they were at the time of the conjunction, a live broadcast from various observatories throughout the Spanish geography -Cuenca , Malaga, Toledo, Segovia, Salamanca and Granada – through telescopes connected to computers. As explained during the broadcast by Joaquín Álvaro, a member of Europlanet, the conjunction has not been clearly seen from all parts of the country. For example, from Cuenca the fog and atmospheric conditions have not facilitated the observation. In Malaga, around 7 pm, Jupiter has shown its most important satellites, and Saturn has also been seen with very good clarity.

Although the meteorological conditions of the Peninsula today have been complicated, and in some areas of the territory the clouds have not allowed us to see much, in other points it has been possible to contemplate Jupiter with its gaseous clouds and the famous rings of Saturn.

The conjunction still has a long way to go, since the countries of the southern hemisphere will be the last to observe it. And, despite the fact that the planets in the coming days will continue to be close – little by little they will move away again – the images that have been glimpsed in the sky have left a memory that will not be repeated, at least, until 2080 .

Excellent image of the planets #Saturn🪐 and #Jupiter captured on Ötscher Mountain in the Turmkogel (#Austria🇦🇺). The photo was taken at 16:05 (UTC) with a Nikon Z50 camera at 105mm focal length and f / 3.4 aperture.
📷Credit: Michael Jäger#StrelladrBelen🌟💫 pic.twitter.com/dqENzXGR64

Today is the great conjunction of Jupiter and Saturn bpm pic.twitter.com/rqRs9HY8Xl