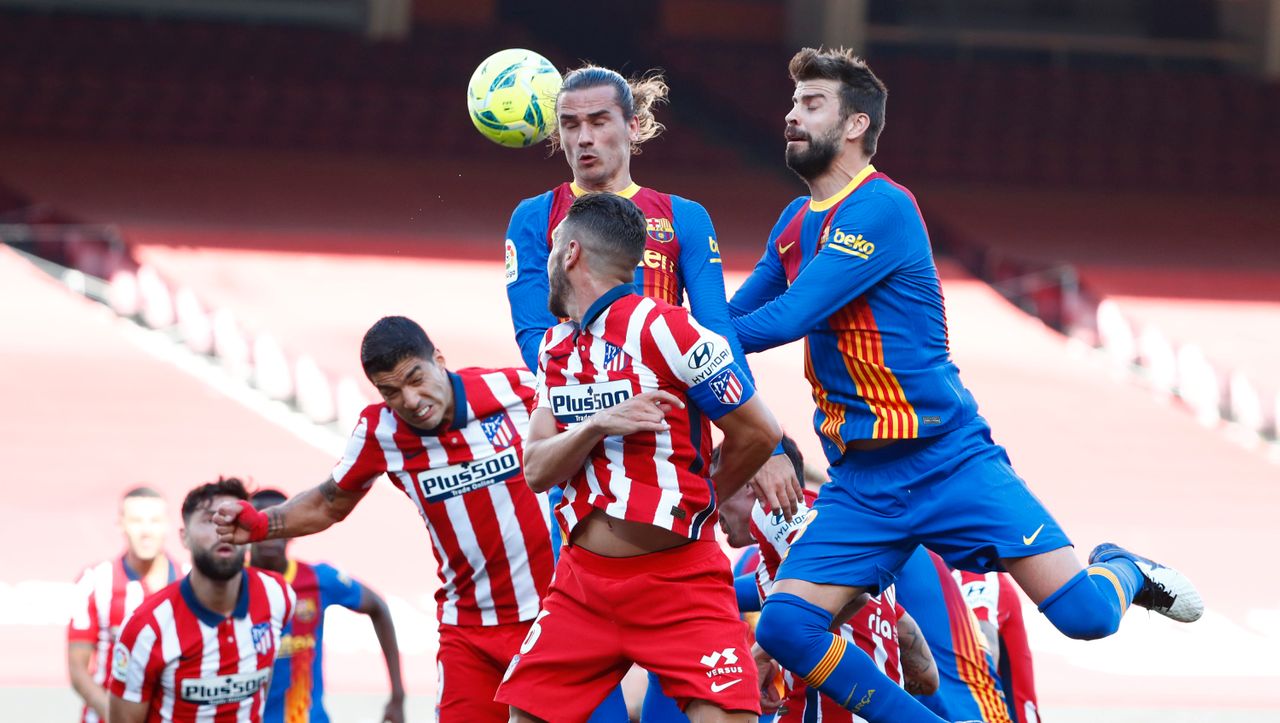 You could call it bad luck, and in a way Ronald Koeman was played badly too. In the match against Granada a week and a half ago, the FC Barcelona coach was sent off for a comparatively harmless comment on the fourth official (“What a figure!”). His team lost and missed the opportunity to take the championship lead for the first time in the season. Yesterday I had another chance in the top game against Atlético Madrid – and again it didn’t work out. They separated 0-0 and stayed two points behind.

Koeman had to direct the match from the stands by cell phone because he was still serving the ban from his alleged insult. But he did not need to hope for attenuating circumstances from the critics. The result fit in well with the pattern of a season in which Barça could only beat Seville of their competitors in the four-way battle for the Spanish championship. His match schedule seemed to be expected, his team too phlegmatic. After the rejuvenated team acted with many mistakes over the season, but often made up for them with even more heart and thus won the Spanish Cup, that was the most shocking realization for the fan base on a frustrating afternoon: that Barça at the decisive moment after so much effort the courage is lacking.

“Inexplicable”, quarrels a commentator on the club-related “Sport” and calls for a “second revolution” after the Koemans. Where the future of Lionel Messi is still unclear and Neymar does not come back after his contract extension in Paris, President Joan Laporta has been refusing an unequivocal commitment to the coach for weeks. The mocked »Marca« after the game even as »Tata Koeman«. It could hardly be more mean, because the comparison is reminiscent of the 2014 season finale, when an apathetic team under Gerardo »Tata« Martino also only scored an unsatisfactory draw against Atlético – and their own supporters applauded their opponents. The Tata (“grandpa”) was history at Barça, followed by the professional revolutionary Luis Enrique.

It’s not that far yet, but the name of longing coach Xavi Hernández has been circulating a little more through the Barça cosmos since Saturday evening. Koeman’s merits are undisputed: in the most chaotic year in the club’s recent history, he shielded and renewed the team and earned the place of the initially disgruntled Messi. Koeman is direct, and that has also been widely praised. The downside of this, however, is a certain inflexibility. As much as he may have mixed up the old hierarchy, he is now stubbornly committed to his new one.

Against Atlético, this led to the fact that after strategist Sergio Busquets’ injury-related offense, he had the young all-rounder Ilaix Moriba replace the similar player type Miralem Pjanic. He can’t do anything with that, he hasn’t played since February. Yesterday Frenkie de Jong had to move to the sixth position, which hurt Barça twice. Firstly, the Dutchman is not that good at it and now, secondly, he was too tactically bound to bring his important dynamic forward. Barça never managed to dominate Atlético in any phase of the game.

After all, from the next game on Tuesday against Levante Koeman can again coach directly on the sidelines against the prophecies of doom. Above all, however, his professional optimism (“Everything is still possible”), which was declared after the final whistle, depends on the mistakes of the Madrid teams. From Barça’s point of view, Atlético would have to lose at least three points in the remaining three games because they won the direct comparison against the Catalans, which was decisive in Spain in the event of a tie. And then there’s Real – which the media unanimously declared the winner at Camp Nou.

The arithmetic speaks a clear language: Real are the only team that still has the title in their own hands. This is also due to the direct comparison that Zinédine Zidane’s team won not only with Barça, but also with Atlético. A win tonight in the chase duel with Seville (9 p.m., Stream: Dazn), and you could approach the finish from pole position. After the endlessly tired appearance in the Champions League at Chelsea and in view of a squad in urgent need of renovation full of ailing and injured, doubts remain about the standing qualities.

There is also a debate at Real about the future of the coach – but because he doesn’t want to admit to her. “I can only say that I will make it very easy for the club,” Zidane replied to the usual question on Saturday, fueling the speculation that has been circulating for months about a second voluntary resignation after 2018. “What drives me are the last four games to finish well.” The season? The term of office? “Everything else is blablabla”.

Not a favorite in the title fight

Because it somehow belongs to folklore, even Atlético’s Diego Pablo Simeone, in office since 2011, was confronted with the subject of his plans on Saturday. “Anyone who knows me knows that this is an inappropriate question,” he replied with a smile, “I think from game to game”. That is indeed his favorite phrase, and after his team, which had been a long way behind in the first half of the season, seemed quite stressed as the lead melted more and more, they seem more to themselves now that he is practically gone. As usual, she never felt uncomfortable when the score was 0-0.

“The key to the title lies in the mental area,” lectures Simeone about a final spurt with some (equally) good teams, but without an irresistible top team. And therefore without a clear favorite.