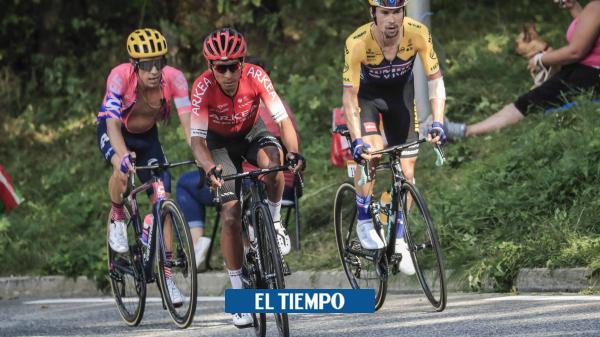 Colombia vibrates with its cyclists in the Tour of Francia. The illusion of winning the competition for the second time in a row is alive.

After the start of the days in the Pyrenees, four of them are part of the 10 best of the general: Egan Bernal (fifth), Nairo Quintana (sixth), Miguel López (seventh) and Rigoberto Uran (eighth).

You may be interested in: (Sensational stage! Nairo, Egan, Urán and López, in the fight)

Nothing is said. This Sunday the first part of the race ends, but without a doubt that Colombian pedaling will have a lot to say on this Tour, which woke up on Saturday, in the 141 km day starting in Cazères and finishing in Loudenvielle, won by Nans Peters, after a break, with attacks among the group of favorites.

Tadej Pogacar was the one who put together the dance on the lot. The Slovenian had to recover some of what he lost the previous Friday in the day of the winds, but his movement caused the others to pinch each other.

Nairo was the one who was most attentive. Shows excellent condition. The day, in addition to that positive point, It showed López pending his rivals and Urán recovering the best form, the one that led him to be the second of the 2017 Tour.

“I see Nairo very well. We realized that he was closing the gap. He tried to leave on the last climb, he opened the way, the path and only Primoz Roglic could keep up with him ”, Javier Mínguez, a Spanish coach, told EL TIEMPO.

The conditions of the four Colombian cyclists are good. That has shown us the first week of the race.

Bernal had a hard time. Once the outbursts were presented, I could not follow them, but later it would come. Perhaps his condition is not the best, but he is a man who finishes races well, he is a long distance runner.

Although today there are questions with him, I think the key is that he is with the best, he arrived with them and he has not wasted time

It is difficult to know its condition. Apparently it was difficult for him on the stage, but there is no need to worry, as he is a runner who goes from less to more.

“Although today there are questions with him, I think the key is that he is with the best, he arrived with them and he has not wasted time, that says a lot, it’s not as bad as they say. Maybe it will be missing “, said the Italian Andrea Tafi, champion of the Giro de Lombardia and the Paris-Roubaix.

“I trust Egan. The truth is that it is different to see a Tour de France with eight stages in the legs than with a week and a half”, said Jhonatan Restrepo, a Colombian cyclist from the Androni team.

Egan, in the end, was clear: “I’m happy to save the day.” López and Urán were attentive. They both do an intelligent Tour, holding on, being at the wheel of others and without showing their cards, saving for their turns.

“Urán is a man of experience, the same as Nairo, and surely that, Besides other things, it is one of the strengths they have. Their seniority and their conditions, if they maintain them, will take them far, “said Tafi.

The one who looked good again was Roglic. Attentive to its wheels, movements and at some point it could get out of the lot, but although the Jumbo Visma, His team, worked all day, failed in the end.

Sepp Kuss was the right man to finish the pace on the ascent, but he succumbed, didn’t respond and it was Tom Dumoulin’s turn. act as gregarious.
Jumbo Visma left their leader alone for the first time on this Tour and Roglic had to defend himself.

He counted on that few of those by his side moved, for the leader, Adam Yates, he only had the strength to be in the group, controlled Nairo, and Egan was not seen
good.

“Every day is different. Ineos is not the shadow of what it was and Jumbo rules. There was a time when they had to change plans because some failed and that is why only Roglic was seen, who defended himself, ”said Mínguez.

It remains to be seen if that happens again, if the Jumbo train fails, Roglic is left alone and how he will respond. His team has run on defense, controlling the group, but it remains to see his men and their leader on the offensive, proposing attacks.

Julian Alaphilippe and Thibaut Pinot paid a high price for wear and tear, who lost the wheel and the options to fight for the Tour title.

Teamwork is important, no one says no, but when push comes to shove, when leaders are face to face, the collaboration of the companions is not so important since the conditions of the leader prevail to face the attacks and defend against them.

There are two weeks and a lot to run. This Sunday there is an important stage, 153 kilometers, between Paul and Laruns, with four mountain prizes, two third and two first, the last one 18 km from the finish.