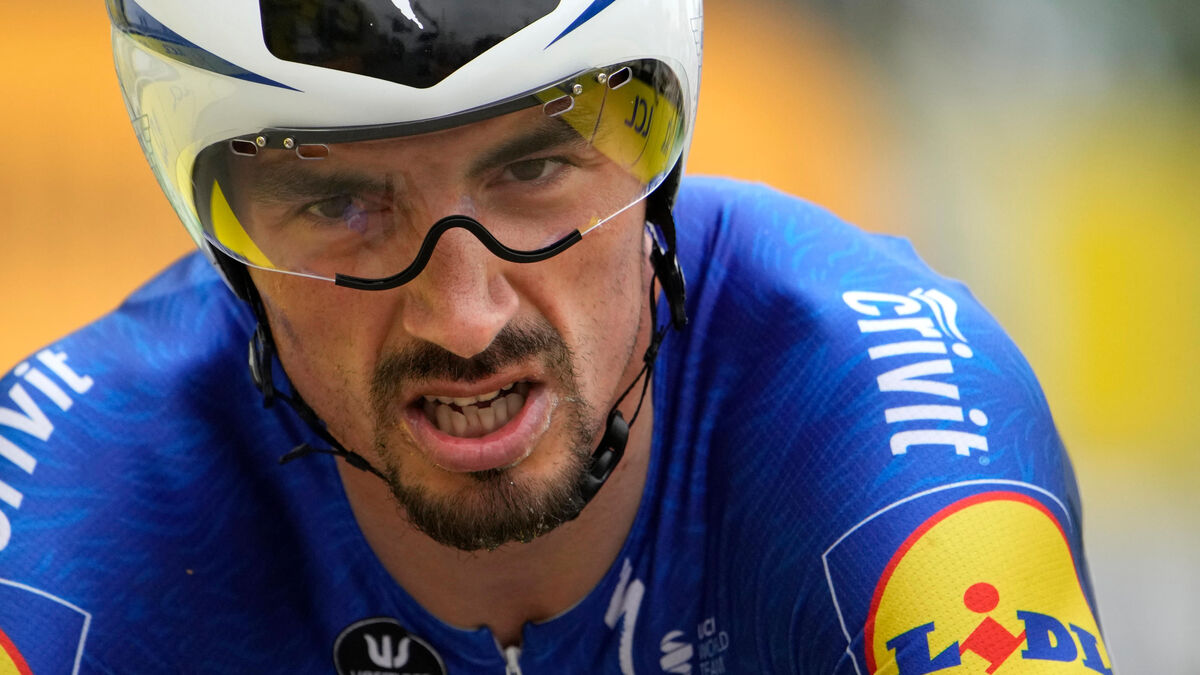 There was that smirk first. Then that little cry, stuck in his throat as soon as the answer to his question boomeranged back to him. “How much am I in the overall standings?” », Launched Julian Alaphilippe in his dark blue Deceuninck-Quick-Step jersey, in striking contrast to his colorful start to the Tour in his rainbow tunic of world champion, which he cannot wear in the time trial, then yellow, and finally green.

His delay is counted in seconds but it seems to him abysmal, already irremediable. His disbursement of 1′11 ′ ‘in 27.2 km on Tadej Pogacar sends him 40 seconds behind the big boss back in business at the height of his 22 years. A blow to age a young 29-year-old dad. “Okay, well we’ll have to review our plans. These few words say it all. Julian Alaphilippe believed in his all-yellow destiny. Irresistible during the first stage at Landerneau, carried by fiery legs and an incredible forelock, he had put himself in the shoes of a potential winner of the Grande Boucle.

The return to reality is all the more shattering. Just enough time to breathe a little in the finish area, to slow down his pulsations, to take a PCR test, health protocol obliges, and the champion gives himself up, masking his disappointment by trying to look good. “I felt bad the whole race, I was not in the rhythm, he explains. I did not have good feelings. I tried to limit the breakage but I heard on the radio that I was out of time. I gave the maximum. I have no regrets. “

“I’m here to win stages, not the Tour”

Then he agrees that his goal is not achieved. “Of course I could have hoped for a little better,” he said. I knew it was going to be complicated. I didn’t want to waste too much time because I wasn’t having a big day. Congratulations to Pogacar. He has set the record straight on his side. He came to win the Tour so it’s a good thing for him. “

Julian Alaphilippe, for his part, now knows that the Big Loop is not for him. Not this year anyway. Not against that opponent, if nothing happens to him of course. The world champion can quietly become the stage hunter again who hits the nail on the head whenever he decides to. Time is on his side, but in a different way now. “Now I want to have fun,” he says. There are still plenty of opportunities. I have things in my head. Afterwards, I will see how I recover. I don’t have to be disappointed. We must not forget my first objective. I’m here to win stages, not the Tour. “