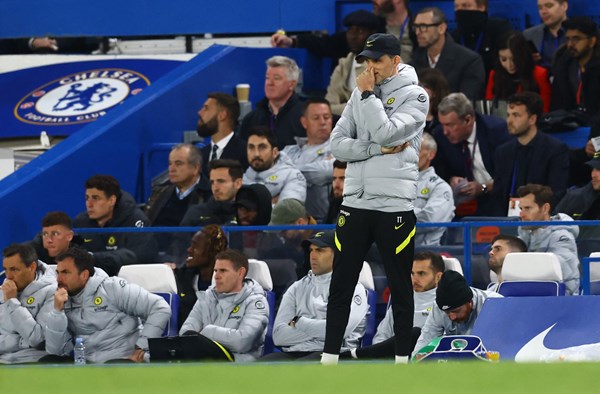 German coach Thomas Tuchel stressed his ability to lead the blue team to compete for titles, despite the club’s current crisis over the transfer of ownership.
Chelsea left-back Antonio Rudiger is preparing to leave the club in the upcoming summer transfers, as he appears close to joining Real Madrid.
Rudiger, 29, is set to leave Stamford Bridge on a free transfer, along with defender Andreas Christensen, who will join Barcelona.
Chelsea lost a clear ground in front of their rivals in the competition for titles next season, but they are still hoping to conclude deals with new players next summer, such as Jules Conde, defender of Sevilla, Spain.
The Blues need to sign two defenders in the coming period, and they also want to include another full-back to compensate for Rudiger’s departure.
And the British news agency “BA Media” quoted Tuchel’s statements in a press conference held today, Wednesday, as he responded to a question about whether his team can compete for championships next season, regardless of what happens in the next summer transfer period, saying: Yes, and this is my job and in The end is practical.
Tuchel added: Regardless of how the situation is resolved and when it will be resolved, how things will be settled in the end, and how active we are in the transfer market.
“Can we respond, in what framework can we do it, in the end we will work hard and try to do our best,” the German coach explained.
“I hope, knowing myself, that I will fall in love again with the team I owned at that time, and I will try to push the team to the limits,” Tuchel added.
“There are still things we haven’t reached in terms of our goals for this season, so there are still things to be achieved, which are big things.”
“This is where our focus is, and from next season, life will go on, whether we like it or not, whether we are happy with it or not,” Tuchel stressed.
“Starting with our preparations for next season, we will do our best, and I will participate fully with all my heart and all my knowledge, for sure,” Tuchel continued.
And Chelsea meet its host Manchester United at Old Trafford tomorrow, Thursday, to continue the pressure to finish the English Premier League, most likely, in third place.
Tuchel hopes that Rudiger and Reese James will be able to return to the stadiums against United, while Mateo Kovacic was confirmed to be absent from the match, due to his continuing problems with the ankle ligaments.
Todd Boely, Sir Martin Bruton and Steve Palyucca head the three alliances in the last round of buying Chelsea, and the succession of Russian billionaire Roman Abramovich in the ownership of the London club.
The three contenders aspire to take a decision from the New York Commercial Bank, the Wren Group, this week, regarding the selection of the best offer from among the offers submitted to buy the club.
Abramovich offered Chelsea FC for sale on March 2, in the wake of the Russian invasion of Ukraine.
The Russian billionaire was then sanctioned by the UK government on March 10, after it was established that he had ties to Russian President Vladimir Putin, according to Downing Street.
Chelsea cannot certify new contracts for their existing players or sign new deals under the terms of strict government licensing.
Chelsea is seeking to complete the sale of the club as soon as possible so that it can return to work normally, and to allow it to compete in the summer transfer market.

Sham Al-Dhahabi celebrates her wedding anniversary.. and thanks Tamer Hosny