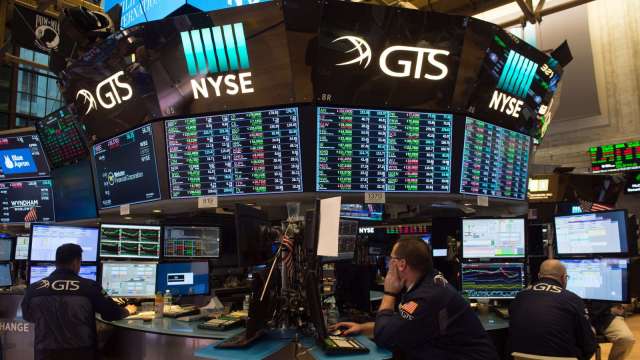 On the eve of the Federal Reserve interest rate meeting and the heavy earnings report, heightened tensions between Russia and Ukraine further dampened risk sentiment, and the major U.S. stock indexes fell collectively on Monday (24th). At the time of writing, the Dow Jones Industrial Average fell more than 600 points or 1.8%, the Nasdaq Composite fell 2.6%, the S&P 500 fell nearly 2%, and the Philadelphia Semiconductor Index fell 2.7%.

Since reaching a record high in early January, the S&P 500 has fallen more than 10%, officially entering correction territory, and weakness in large tech stocks continues to weigh on the index.

The Federal Reserve will release its January monetary policy decision in the early hours of Thursday (27th) Taiwan time. Fed funds futures traders expect the Fed to raise interest rates by 25 basis points in March and three more times before the end of the year.

As tensions between Russia and Ukraine intensified, so did market concerns.

The U.S. State Department on Sunday (23rd) ordered the embassy personnel and their families in Ukraine to evacuate, and at the same time raised the travel warning level for Russia and Ukraine to a high level. Make sure the conflict doesn’t escalate further.

The VIX fear index surged 15% to 33 on Monday, the highest since December last year, as risk aversion intensified.DollarIt was favored again, and reached the 96th level before the deadline, and the price of gold rose slightly.

FactSet data shows that currently, one-fifth of companies in the S&P 500 have reported earnings, and more than 80% of them have reported better-than-expected EPS.

Following rumors that Acacia Research Corp raised 64 per share DollarAfter the takeover bid, Kohl’s has received another takeover offer in the short term. Reuters reported on Sunday that private equity firm Sycamore Partners had offered at least 65 Dollar, and negotiated with Kohl’s about the takeover offer.

Activist investor Nelson Peltz’s hedge fund Trian Fund Management is rumored to have invested in consumer goods giant Unilever, but it is not yet known the size of the increase.

Graham-Taylor said that inflation will decline this year, and the Fed will raise interest rates as many times as the market expects.

Julian Emanuel, chief equity and quantitative strategist at Evercore ISI, believes that the process of future rotations towards value stocks is likely to be long-term, with quarterly stock rotations more likely than weekly ones.

I have a relationship with my husband twice a day and I don’t have enough, and I want him more to do what??.. An unexpected response from Heba Kotb shocked Amr Al-Leithi!!