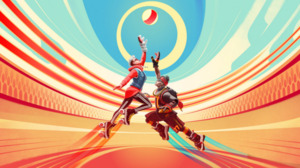 ‘Roller Champions’, which is scheduled to be serviced in an F2P (Free to Play) method, is a game in which characters wearing roller skates compete to score goals while possessing a ball. am.
The game is played in a 3v3 team battle, and you can enjoy competition through various plays such as track frequency, shooting, passing, tackle, and team technique. Users can advance to new stadiums by building their reputation through play, and they can also choose sponsors and get various play rewards. In addition to Ranked Play, limited-time special game modes will be introduced in-game.

In the cinematic trailer released along with the release date announcement, the characteristics of ‘Roller Champions’, a combination of roller skating and ball games, can be seen well. Various driving techniques and team play were used to block the opponent’s interference, while a scene in which he climbed up the wall with the ball in possession of the ball and passed through the opponent’s ring was revealed.
The result of the 3v3 match will be decided by the first team to score 5 points wins, and a high-speed match using roller skates is expected.

Meanwhile, ‘Roller Champions’ will be officially released on PS4, Xbox One, Xbox Series X/S, PC, etc. on the 25th, and will support cross-play and progress sharing between all platforms.

Hong Young-ki, an amusement park look that reveals the bottom of the chest… “I think my husband would hate it.”