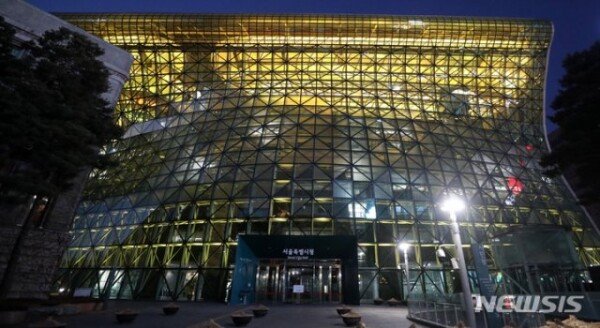 The Seoul Metropolitan Government launched the ‘Peace Light’ campaign, which displays blue and yellow lights, the colors of the Ukrainian flag, at four facilities that symbolize Seoul, including the main building of Seoul City Hall, Sebitseom Island, and Namsan Seoul Tower.

The purpose is to comfort the Ukrainian people suffering from war and to participate in spreading the anti-war message.

According to the Seoul Metropolitan Government on the 27th, the city conducted the Light of Peace campaign at the main building of Seoul City Hall, Sebitseom, Seoullo Media Canvas, and Namsan Seoul Tower on the afternoon of the 27th.

After Russia invaded Ukraine on the 24th (local time), major cities around the world, including New York, London, and Rome, launched a campaign to illuminate their landmarks with the blue and yellow lights that make up the Ukrainian flag, and the Seoul Metropolitan Government also joined the campaign.

Seoul Mayor Oh Se-hoon also posted on his Facebook on the same day, “Russian military offensive against Ukraine is getting stronger.” said.

Mayor Oh said, “The history of Ukraine, which has been repeatedly divided and chaotic under attack by powerful powers such as Russia, Poland, and Austria for hundreds of years, is similar to the history of the Korean Peninsula in the past, which suffered from invasion by foreign powers.” It is heartbreaking to see the people of Ukraine who are trying to protect, President Zelensky, and former President Poroshenko who participated in the militia,” he said.

“With all the hearts of all Seoul citizens, I send my condolences to the Ukrainian people and sincerely hope that the situation will be resolved peacefully,” he said.