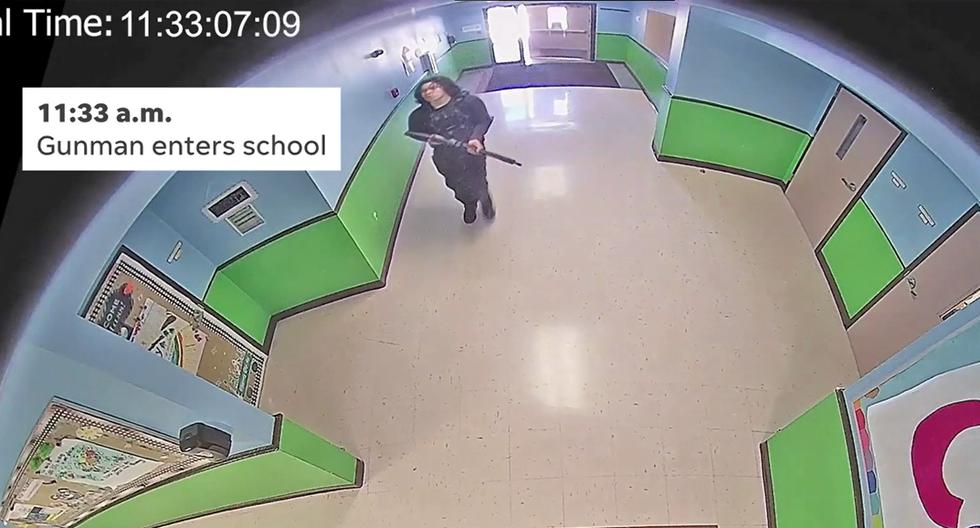 The newspaper The Austin American-Statesman released portions of surveillance camera video Tuesday showing police officers retreating and waiting in the corridor of the Robb Elementary School in Uvalde, Texasas the fatal May 24 shooting was taking place.

Footage shows the shooter, later identified as Salvador Ramos, 18, walking unopposed down the hall with a semi-automatic rifle. Gunshots are heard as the shooter enters a classroom, and a minor is seen running across the hall.

It can be seen at officers – local, state and federal, heavily armed and wearing bulletproof vests, helmets and in some cases shields – run away at the first shots that seem directed against you.

You can see them below walking back and forth down the aislesome going out of frame and then reappearing.

Others point their guns at the classroom, talking, making calls on their mobile phones, sending texts or looking at blueprints. No one enters or tries to enter the classroom.

Even after hearing the last shots 45 minutes after the police arrived, they are still waiting.

When federal agents finally entered the room where Ramos was and killed him, an hour and 14 minutes had passed. since the arrival of the officers. By then the shooter had killed 19 children and two teachers, and injured 17 others.

The video was released by the newspaper while the legislative committee of Texas that investigates the shooting plans to show the complete recording, of more than an hour, next Sunday to the relatives of the victims and later to the general public.

“We will first meet with members of the community and give them an opportunity to view the hallway video and discuss our preliminary report. Shortly thereafter we will release both things to the public.” State Representative Dustin Burrows, chairman of the investigative committee, said Tuesday on Twitter.

Arica: farmers block streets with tomatoes and warn that “many will go bankrupt” | National

How did dinosaurs mate?Scientists search for answers – BBC News