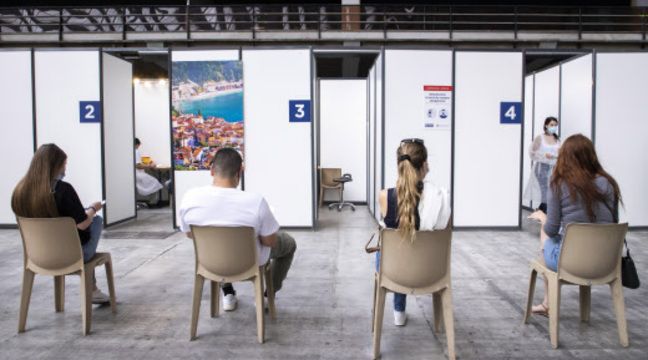 It is “a little disappointed” that Professor Michel Carles, head of the infectious disease department at the CHU de Nice, presented himself to the press on Wednesday to take stock of the evolution of the Covid-19 epidemic in the Alpes-Maritimes. “It is insane to have a means of protecting oneself from the disease and not to use it”, he blurted alongside the prefecture while the number of first injections slowed down in the department, where a cluster of the Delta variant, reputed to be at least twice as contagious, has just been detected.

A situation which could raise fears of an epidemic resumption, especially since the number of cases currently recorded is still ten times higher than what was observed last year at the same period. The prefecture is working on this possibility of a fourth wave and announces that an “action plan” is already ready.

“If necessary, we will have to put in place restrictions, and in particular, why not, a curfew,” explains Benoît Huber, the chief of staff of the prefect. We know what we will do, but the goal is not to have to do it. “

Vaccination “to get by”

With Romain Alexandre, the territorial delegate of the Regional Health Agency (ARS) and Prof. Michel Carles, he launched a new call for vaccination, while the department recorded a drop in the number of people receiving their first injection. Across the Alpes-Maritimes, just over 52% of the population has received at least one injection and 37% are on a full vaccination schedule.

But, that is not enough, “to really get by, you have to vaccinate as widely as possible without forgetting the barrier gestures”, repeats the infectious disease specialist, surprised to still see mistrust “while three billion doses have already administered around the world ”.

To meet the objectives in the department, the authorities hope that 85,000 first injections and 159,000 complete vaccinations will be carried out between July and August.

A cluster of the Delta variant in Antibes

There is urgency, according to her, because the Delta variant “whose circulation has been confirmed in the department”, according to Romain Alexandre could quickly become the majority. Antibes town hall confirmed to 20 Minutes that 16 positive cases of this mutation of the new coronavirus have been recorded at a dance school in the city. “These are six children and ten young adults. There have been isolations. In total, 200 people were tested and the home is now circumscribed, ”assured the municipality.

This much more transmissible strain worries as populations will concentrate with the arrival of tourists and that deconfinement has passed a new stage on Wednesday. It should not be possible to hold summer festivals and concerts without a mask. The prefecture of the Alpes-Maritimes says it is in favor of the establishment of an obligation.

“A consultation on the subject is launched at the regional level because the situation does not justify, at this stage, a differentiated treatment with the departments of Var or Bouches-du-Rhône”, indicates Benoît Huber.