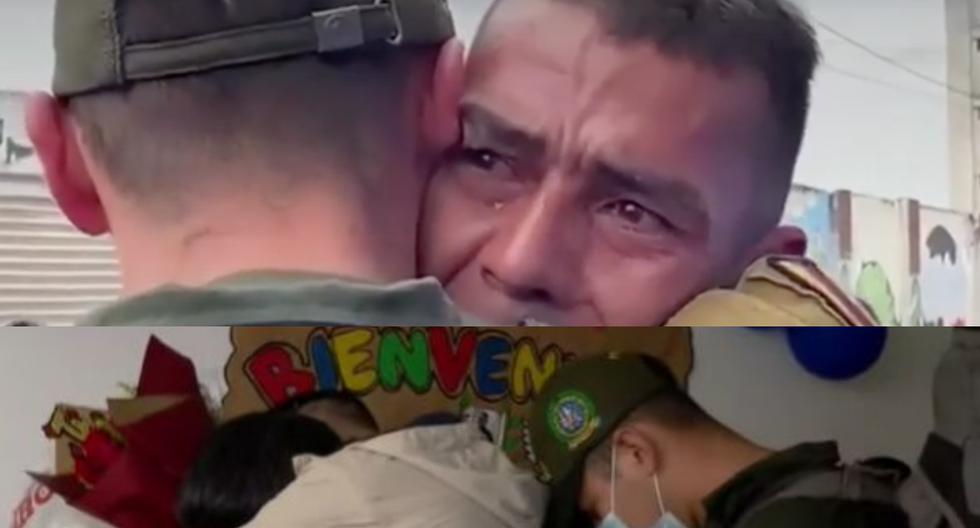 A reunion for which a mother and a son waited almost 20 years became a reality thanks to a command of the Unified Action Groups for Personal Freedom (GAULA), special forces units of the National Police of Colombia, who, at their request time, it was his younger brother. This is the moving account of how Ángel Rincón found by fate his older brother Fabio, who left his home in Bucaramanga for Bogotá 20 years ago to undergo a medical examination.

While the disappearance of Fabio Rincon led to an anguished and unsuccessful search by his relatives, after two decades this became a mourning for several of them except for his mother, who never lost faith in finding him alive or dead and entrusted herself every day to the Virgin of Chiquinquirá until her prayers were finally answered. In dialogue with Snail News, his brother Ángel remembers that he was approximately 10 years old when he saw him for the last time; however, their lives were about to take an unexpected turn.

MORE STORIES | A young woman raising her orphaned siblings receives $ 25,000 from youtuber thanks to a viral video from TikTok

For work reasons, the uniformed man traveled to Tolima to participate in an anti-extortion course at the International School for the Use of Police Force for Peace (CENOP) on Tolima and, as soon as it finished, he had planned to return with his companions to the Police Region No. 5 on Cucuta, city where it stands out; However, by ironies of life the insecurity of Bogota was a key piece for this history with a happy ending since they received the order to support the fight against this scourge by carrying out joint patrols with the local authorities.

Coincidentally, in those days FabioSomehow, he got in touch with another of his brothers to ask for money to fix the cart he used as a work tool. This was the first clue to the prodigal’s whereabouts in nearly 20 years, and without hesitation, they called Angel to update you on everything. When they called back the number they registered, they discovered that it came from Bogota, exactly from a neighborhood called La Favorita, considered one of the most dangerous sectors of the Colombian capital.

MORE STORIES | Twins were born two years apart: “I thought I was adopted,” said the youngest of them

The story of the reunion told by its protagonist

After asking permission from his superiors, Angel Rincon – dressed in civilian clothes – he set out to find his lost brother. Upon arriving at the place, he spoke with all the homeless people who were in his path, but unfortunately he could not find the whereabouts of Fabio. Then, he called again the number where he had contacted and they gave him a more specific address where the owner of the phone is located, who said that he did know his brother, that he worked with them as a recycler and that he was surely there for the surroundings.

With the new data and an old photo of his older brother, the policeman continued his relentless search and rescue mission, the same one that was documenting his family through videos. When it seemed that his efforts had been in vain, he returned to where the person who loaned the phone to Fabio and together they went out for one more walk, passing again through a place where he had not noticed a crucial detail. “He tells me ‘that’s the wagon.’ So, I got very, very happy, very blissful, but at the same time I didn’t think about finding him in this situation “, said.

“I opened the plastics and I see him there and I say to him ‘brother Fabio, he stares at me and doesn’t recognize me’. He says ‘who are you, my brother?’, I said ‘yes, your little brother’. I told him I was looking for him and I found him thank God, God is very big and I hugged him “added the policeman, who immediately contacted his family to let them know that he had achieved his mission. After taking his brother to a hotel to wash up, buy him new clothes, and eat something, they stopped at the Cerro de Monserrate to thank for the long-awaited reunion.

A happy ending to this modern tale of the prodigal son

Before traveling to Bucaramanga, the two returned to the place where Fabio He spent almost the last 10 years of his life saying goodbye to his friends and bringing them some food. The ex-military says that, after being injured in a minefield, he left for the Colombian capital for a medical meeting and, once there, fell into drugs, a “hell” what was it “Impossible to get out”. “I looked at myself in a mirror and sometimes I cried, tears came to me seeing that it was not the same as when I came home. He was here in the streets and he was not the same. One is destroyed “added.

With a pillowcase that she used as luggage, Fabio and his younger brother were transferred on a police plane to Bucaramanga, his hometown, and upon landing, the nerves were more than evident in the prodigal son. Before arriving home, the older brother of Angel He asks you to stop at a flower shop to buy a bouquet and write an emotional dedication in his own handwriting. “I want to tell you that I love you very much, that I forgive for so long being so far from you, dear mother”, he read part of the written message with great emotion.

When he arrived at the house from which he left almost 20 years ago, the first thing he did was go directly to his mother and merge into a hug, also accompanied by tears of joy for a reunion that they both waited for so long. “Diosito, thank you because you brought it to me”, said her mother in the middle of crying to have her son back, while he asked her to forgive him for everything. Currently, Fabio you are at home recovering and Angel, patrolling the streets in full line of duty as a proud element of the Colombia National Police.