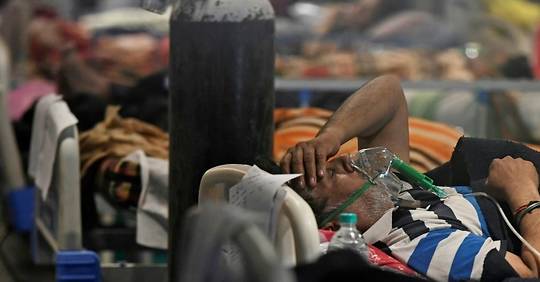 Lhe Covid-19 pandemic worsened Thursday in India, with a new daily record number of deaths, while in Europe, France announced its timetable for the gradual lifting of the devices against the Covid, despite a fragile health situation.

The World Health Organization (WHO), however, warned Europe on Thursday on easing restrictions, saying “the situation in India can happen anywhere”.

The major health crisis that this country is going through may have its origin in the so-called Indian variant of the coronavirus, but also in certain behaviors such as non-compliance with health restrictions, underlined the WHO.

India, the fourth most affected country in terms of death toll – behind the United States, Brazil and Mexico – deplores a total of 204,832 deaths from Covid-19, including 3,645 in the last 24 hours, a new plus high.

On Thursday, a first US military plane loaded with part of the emergency aid of more than 100 million dollars announced by Washington was to land in New Delhi.

“Hospitals are running out of beds. Bodies are also piling up in crematoriums,” Firhad Hakim, the city’s chief administrator, told AFP.

And four cases of contamination with the Indian variant have been detected in Vietnam, a country relatively spared from the coronavirus, according to official media.

Brazil exceeded 400,000 coronavirus deaths on Thursday, according to data provided by the Ministry of Health of the second country most bereaved by the pandemic behind the United States.

Even if the curves are starting to stabilize on a high plateau, the death rate is the highest there in the Americas and the southern hemisphere: it is 189 per 100,000, exceeding that of the United Kingdom (188).

Brazil also explained that its refusal to allow the importation of doses of the Russian vaccine Sputnik V was based on data provided by its designers, to defend itself against accusations of defamation on the part of Moscow.

In Europe, where the threshold of 50 million contaminations was crossed on Wednesday, according to an AFP report, the Old Continent on Thursday totaled 1,062,703 deaths from Covid-19 out of the more than 3.15 million identified worldwide.

The pandemic seems to be slowing there in the majority of countries, which are cautiously relaxing their devices. The Netherlands reopened their café terraces on Wednesday and lifted the curfew.

In France, where a timid decline in the number of new infections seems to have started, President Emmanuel Macron sketched out the outlines of deconfinement on Thursday, unveiling the agenda of the planned reopening.

Shops, bar and restaurant terraces as well as cultural venues, including cinemas and museums, will reopen from May 19.

Cafes and restaurants will resume their indoor activities from June 9, when the curfew will then pass to 11:00 p.m. (10:00 p.m. GMT), before nighttime restrictions and gauges are lifted on June 30, if health conditions allow.

Portugal, meanwhile, will reopen its land border with Spain on Saturday and will enter the same day, 48 hours earlier than expected, in the fourth and final phase of its deconfinement plan started in mid-March, announced Thursday. Prime Minister Antonio Costa evening.

Germany, for its part, administered 1.1 million doses of vaccines against Covid-19 on Wednesday, a national record, becoming the first European country to exceed one million injections in 24 hours.

The most populous country in the EU has also for the first time vaccinated more than 1% of its population in 24 hours, announced the Minister of Health, Jens Spahn.

In the United States, after months of extreme caution in the face of a second wave of Covid-19, New York City plans to “fully reopen” on July 1, its mayor Bill de Blasio said Thursday.

Vaccines by the billions

In the global vaccine race, the American laboratory Moderna announced Thursday its intention to invest in its production lines to produce up to three billion doses of its serum against Covid-19 and hopes to provide between 800 million and one billion of doses this year.

“We must take the lead to be ready if necessary for a third booster dose,” Moderna European director Dan Staner said Thursday.

The presence of the Indian variant worries in Europe, the German health authorities having said Thursday to have identified several cases, while a first case was detected in France, in the southwest.

In Italy, 10% of the passengers and crew of a plane that arrived in Rome Wednesday evening from India have tested positive, authorities said without being able to specify whether it is the Indian variant.

See Also:  Workshops can open "as long as they are not a risk", although "they should only attend emergencies", according to experts

In some Austrian nurseries, children are now tested for Covid-19 via a fun and unprecedented solution to control the spread of the virus: a simple pacifier to put in the mouth for 90 seconds.