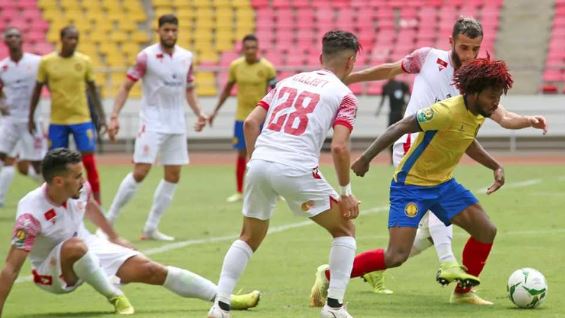 The Moroccan Wydad team qualified for the final of the African Champions League, after its draw with Petro Atlético, with a goal for the same, in the meeting that was held at Mohammed V Stadium, in the second leg of the semi-finals of the tournament.

As expected, the defensive caution on the part of Wydad, who played on the counterattack in the first quarter of an hour, succeeded in reaching the goal in the seventh minute and took advantage of a rebound from the defense from the right side from inside the penalty area and hit a powerful ball that passed outside the net.

After a quarter of an hour, Petro Atlético began to gain more possession of the ball until Gelson da Silva took control of an early goal in the 20th minute, after hitting a powerful ball to the right of Ahmed Reda Teknaouti.

Wydad did not wait long until he scored the equalizer in the 27th minute through Mohamed Farhan, with a perfect header that popped into the net. The first half ended in a positive tie with a goal for the same.

With the beginning of the second half, Petro Atletico wanted to score the second and third goal in order to snatch the qualification ticket, but in a defensive heedlessness in the 49th minute, Ayman Al-Hassouni scored a goal, but it was canceled due to a handball on Badi Awok.

In the 91st minute, Petro Atletico almost punished Wydad with a second goal after Anderson Cruz shot, but the ball hit the crossbar and went out for a corner kick.

Wydad had won the first leg match 3-1 at the 11 November Stadium in Angola, and needed to win any result, draw or even lose by one goal difference in order to qualify for the final.

Wydad is waiting for the second qualifier in the match between Al-Ahly and ES Setif of Algeria, which will be held tomorrow, Saturday, at the May 8 Stadium.

Space tourism – Next Blue Origin flight in a week

Trapped in the desert or at sea: Qatar says you can call this number for help