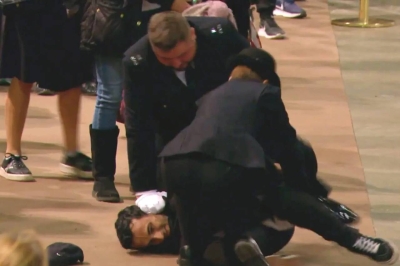 Exclusive translation: Chaos erupted in Westminster Hall on Friday night when a man was arrested who rushed towards the coffin of Queen Elizabeth II.

The shocking scene took place around 10pm yesterday. In front of dozens of mourners who waited in line to pay their respects to Queen Elizabeth. According to the New York Post.

The Guardian reported that the suspect sped off the line, climbed the steps to the coffin and touched the coffin before he was taken into custody by the Metropolitan Police.

Footage shows security officers hanging the suspect on the ground while other mourners look on in disbelief.

Mourners were on the line for about 12 hours at the time of the disturbances, which came just hours after King Charles III, Princess Anne, Prince Andrew and Prince Edward stood guard by the coffin.

Earlier on Friday, a man accused of sexually assaulting two women was reported to have been waiting in a long line to see the Queen’s coffin.

Police presence was intensified across London as large crowds gathered to pay their respects to Queen Elizabeth, who died last week at the age of 96.

A picture of a Mahsa on the bed spreads among the Iranians .. “the guide killed her”