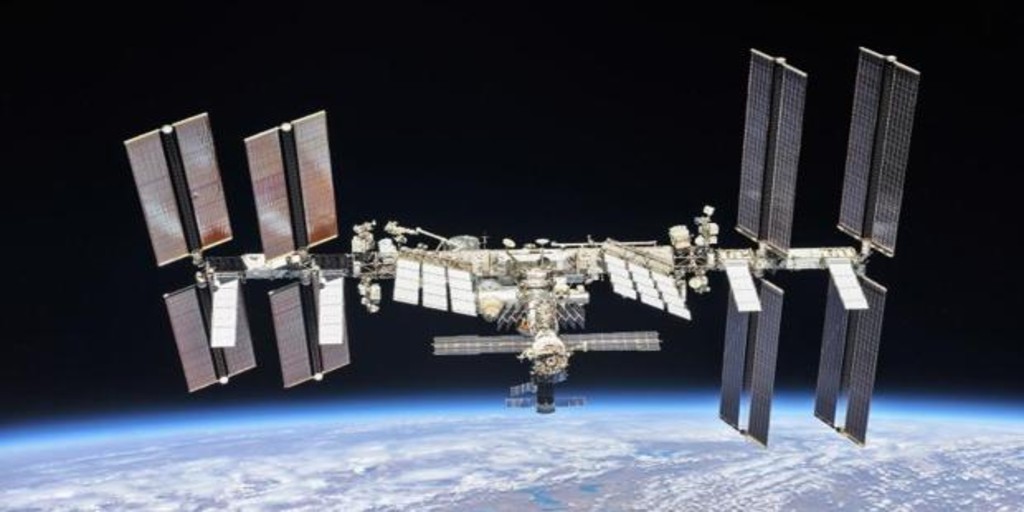 After President Biden announced Thursday that new sanctions on Russia over the Ukraine invasion will hit its aerospace industry, including its space program, the head of the Russian space agency Roscosmos, Dmitry Rogozin, has made a disturbing warning on his Twitter account. Rogozin recalled that the orbit of the International Space Station (ISS) is controlled by Russian engines. “If cooperation between us is blocked, who will save the space station from an uncontrolled de-orbit and crash in the United States or… in Europe?” he has written. Currently, the crew of the orbital platform is made up of four NASA astronauts, one European and two Russian cosmonauts.

“There is also a possibility that a 500-tonne structure (in reference to the space laboratory) could fall on India and China.

Do you want to threaten them with such a possibility? The ISS does not fly over Russia, therefore all risks are yours. Are you ready for them? »He continues. The suggestion that such a thing could happen seems so far-fetched that it resembles more bravado than serious warning.

garbage, with which your talented businessmen have polluted the near-Earth orbit, is produced exclusively by the engines of the Russian Progress MS cargo ships. If you block cooperation with us, who will save the ISS from an uncontrolled deorbit and fall into the United States or…

NASA and Roscosmos have a long history of working together that was seriously threatened by the Ukraine crisis in 2014. Washington imposed a list of sanctions on Russia for annexing Crimea and destabilizing Ukraine. On that occasion it was also Rogozin, then Russian Deputy Prime Minister, who threatened to break the collaboration with NASA. However, the two giants continued their joint operations.

Waiting for new events, it seems that the same thing will happen this time. For now, NASA has confirmed to various US media that civil cooperation will continue with all its international partners, including Roscosmos, in space, especially regarding the International Space Station. Ongoing station operations will continue as normal, including crew travel to the orbital outpost and return to Earth. This includes the return of NASA astronaut Mark Vande Hei, scheduled for March 30, in a Russian Soyuz spacecraft, in which Russians Anton Shkaplerov and Pyotr Dubrov will also travel.

NASA and its international partners have maintained a continuous human presence on board the ISS, 400 km above our heads, for more than 21 years, during which time they have carried out multiple scientific experiments in different fields such as medicine, biology or the Agriculture.

Cooperation, according to the US space agency, will also continue on the ground. Three Russian cosmonauts are currently training at NASA’s Johnson Space Center in Houston, and two US astronauts completed their training in Russia in February.

However, Russia has long shown its intention to explore space on its own. In mid-2020, Rogozin announced that Moscow was renouncing its participation in the US Artemis lunar program so that the human being could return to the Moon (in 2025), because it had become a “great political project”. The head of Roscosmos assured that Russia opposes the privatization and commercial exploitation of the Moon, as proposed by the former US president, Donald Trump. Instead, Russia signed an agreement with China to build its own station around the Moon.

In addition, last year, Russia announced its intention to have its own space station, the Russian Orbital Service Station (ROSS) from 2024. In fact, it has already prepared its first module, the Science Power, which was initially planned to dock with the current ISS.

The best scenes from The Godfather