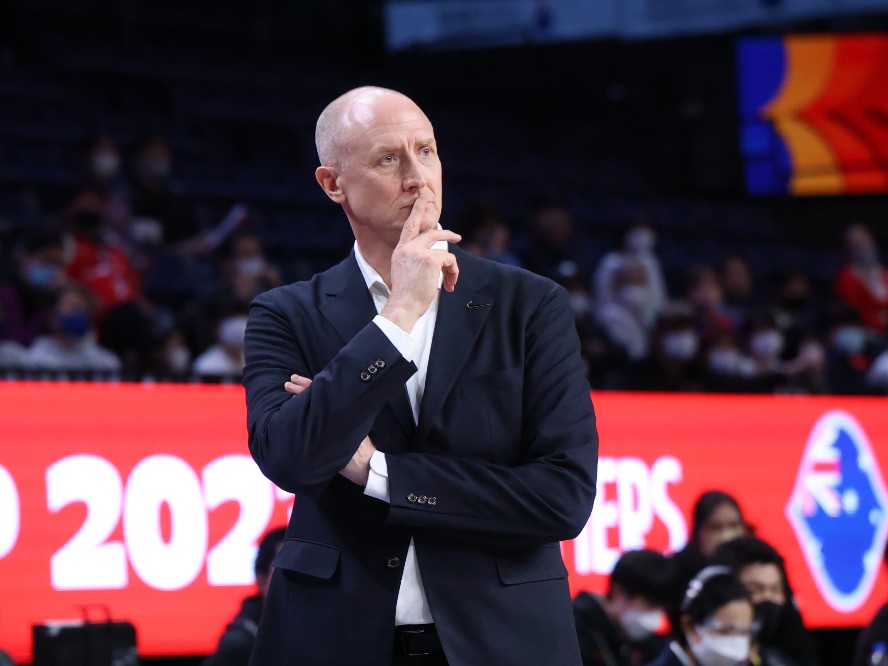 “I’m proud to play with the feeling of fighting to the end.”

The Japan Men’s Basketball National Team played against Australia in the second match of Window 2 of the World Cup qualifying round. He finished the first half with 40-42, but in the third quarter, he allowed a run of 0-9 in three and a half minutes and was pulled away at a stretch. It was a defeat.

Commander Tom Hovasse believed that the first half, which was on par with his opponent, was not good, and therefore found a win. “We finished the first half just by allowing a two-point lead. At this point we weren’t playing the best basketball. We made a lot of mistakes, so we’re very optimistic in the second half. I thought that if I could fix some mistakes, I would have a great chance of winning. “

However, in reality, I was overwhelmed because I could not cope with Australia’s high correction power. Hovasse continues. “In the second half, Australia increased defensive pressure and we were a little impatient. And we missed the open shot. If it had been decided, the match would have been a little different, but we couldn’t. “

For Australia, the match against Japan has been a painful defeat since the last World Cup qualifying on June 29, 2018. Nick Kay, who was playing in that match, had a strong desire for revenge. “Many members have changed from the match we lost to Japan last time. However, I’m glad that I and Angus (Brantt) have experienced and were able to play the humiliation. I’m proud of playing today. “

In fact, Kay showed 15 points, 11 rebounds and 7 assists in the 31st minute, and Brandt also scored 14 points and 4 rebounds with 7 out of 9 field goals in the 19th minute. There is no doubt that both of them became the driving force behind the Australian victory, with a plus or minus of +20 or more, which represents the difference in goals and goals in the time they participated.

Looking at the final score, there is a strong impression that it overlaps with Window 1’s match against China, which suffered a series of losses. However, Hovasse emphasizes his mental progress, “I’m proud to play with the feeling of fighting to the end.”

Young players who embody the basket that Hovasse wants

With this, Window 2 has 1 win and 1 loss, including the 26th when it competed against Chinese Taipei with 76-71, and 1 win and 3 losses in the qualifying total. Having won the Hovasse system for the first time would have given the team considerable confidence.

And the commander talks about the harvest of these two games. “I’m still looking for a player who fits this style and who can compete with the height. Some have shown good play. I’m looking forward to it more. There were a lot of positive elements in

It fits the style and can compete with the height. Takuma Sato is the representative of the new players who played under Hovasse this time and showed a performance that satisfied these two points. While there are many players who have not been able to cope with the differences in style between the national team and the team they belong to, they jump into the offense rebound and tip to connect to my ball. He showed a keen reaction to the loose ball and did not appear in the stats, but he showed a very important hard work, a 3-point shot from the corner and his own strength as in the case of Chiba Jets. As a player with unique characteristics such as the part that can not be defeated in a human bullet battle that makes the best use of the size of 197 cm, it gave an impact that can always be a player that you want to put in one frame of 12 people.

There were other injuries, and he only played in nine and a half minutes against Chinese Taipei in these two games, but Takumi Saito was also shining. In Hovasse’s style, such as making a kickout pass from a drive under the goal, the movement of the guards to cut into the paint and toss the opponent’s defense is also important for improving the accuracy of the 3-point shot.

In these two games, the scene where the guards actively drive was conspicuous compared to Window 1, but even if the defense was contracted, it was difficult to bring it into the development of making a gap by handling the pass at a good tempo from there. .. Many point guards stood on the court in the four games of the Hovasse system, but it seems that Saito is one step or more ahead in the ability to create a gap with a wide field of view and an accurate pass. I would like to see him play for 20 minutes, 25 minutes or more even for the Japanese national team.

The key is how many players can shine even in the national team.

As Hovasse summed up, the team was in the process of trial and error, and it was the harvest that was able to collect a lot of data for the future. However, it is not something that only Japan can obtain. Looking at the opponents this time around, Australia’s commander Rob Beverridge emphasized that “we have a lot of young players in some veterans,” and even without the NBA team, it’s a young-dominated experience. It was a member composition to pile up. Chinese Taipei is also a member who can be said to be less than the 2nd army, mainly young people, and Japan was the highest in terms of age. The reality is that both teams had a short preparation period of rush work, equal to or better than Japan. And this result, given the great advantage of the Japanese home, is a part that must be taken calmly.

In particular, there are various circumstances in this Corona disaster, and it is unavoidable that there will be restrictions on convening members even in the B League. However, unlike girls who can create the best time in the world for their representative activities, boys cannot basically expect that advantage. Japan can grow from now on, but it is the same for rivals in Asia and the world. Whether it is possible to create a support environment that can generate a faster growth rate than others, and considering that, it is difficult to say that the situation surrounding the current representative is a bright future.

From now on, each player will return to the B League until the next window and work hard for self-improvement. There are many differences between the B League, which can use a powerful foreign national as a screener, and the representatives who cannot do it, but there is one thing in common.

As symbolized by Togashi, Nishida, and Saito, the players who can break through the situation on their own without the support of foreign nationals in the B League are, of course, shining as representatives. That is why I would like to expect the further rise of Japanese players who will be able to bring their own power to the finish in the league match, which will be the second half of the match.

Challenges other than play in the Japanese basketball world

And finally, apart from basketball, what stood out in this Window was the serious lack of spectators. There were 2253 players against Australia and 898 players against Chinese Taipei. In a bad sense, it was a big difference from the home game of the Ryukyu Golden Kings, which boasts one of the best spectator mobilization in the B League. The biggest factor is probably that the audience from other than Okinawa could hardly be expected due to the corona disaster. However, in addition to that, the Chinese Taipei match was held at 12 o’clock tip-off, which was too early for watching sports. Another major factor is that the ticket price was high.

Looking back, before the Tokyo Olympics, there was no Rui Hachimura when the Japanese national team played a warm-up game at the Okinawa Arena, but it is clear compared to the Ryukyu game even though Yuta Watanabe, who won the NBA contract, was participating. The audience was small. There is no guarantee that the Corona wreck will end at next year’s World Cup finals. In addition, unforeseen circumstances such as breakdowns are common, and it is unknown whether the best members will be able to face them. That’s why it was the number of spectators in the two games that were pointed out that they needed to be drastically improved in terms of marting and tickets and reviewed.