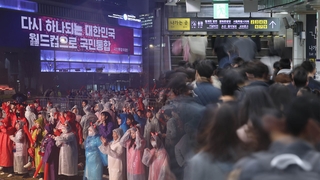 The Seoul Metropolitan Government announced that it would extend the operation of subway lines 2, 3, and 5 until 3:00 am tomorrow (3rd) in preparation for street cheering for the national football team’s World Cup match in Portugal.

Late-night buses will run 14 routes normally, and will be dispatched intensively to the downtown area, including Gwanghwamun, from 2 to 3 a.m. tomorrow.

The city of Seoul also deployed 48 more personnel than normal for the safety management of the four stations near Gwanghwamun Square, and as a cold wave was predicted, the number of emergency evacuation spaces equipped with heating equipment was increased from 10 at the time of the second round. It was announced that the operation would be expanded to 80 people.

A winter storm will bring three feet of snow to the western United States.