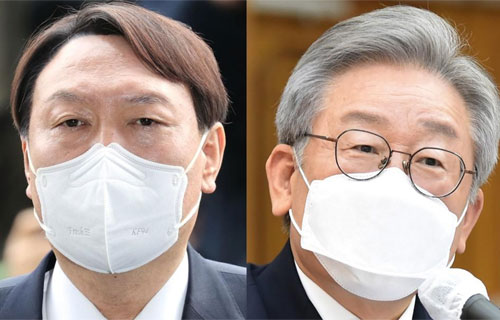 Former Prosecutor General Yoon Seok-yeol’s approval rating for the next presidential election has hit a new high since March.

According to Realmeter, an opinion polling company on the 10th, in a survey on the preference of the next presidential candidate conducted on the 7th and 8th on the request of OhmyNews, former President Yoon reached its own high with 35.1%. In the same survey, the approval rating of former President Yoon was 34.4% in March, then fell to 32.0% in April and 30.5% in May, but then rebounded this month.

The approval rating for former President Yoon by the people’s power support group also reached 63.5%, up 2.8 percentage points from the previous month. This figure, which stood at only 33.8% in February, jumped to 63.9% in March and has remained in the 60% range.

The preference for the presidential candidate for Gyeonggi Governor Lee Jae-myung, the number one passport holder, was 23.1%. It showed an upward trend last March to 21.4%, April 23.8%, and May 25.3%, and then decreased. In addition, Lee Nak-yeon, former leader of the Democratic Party of Korea, with 9.7 percent, independent lawmaker Hong Joon-pyo with 4.6 percent, former lawmaker Yoo Seung-min with 3.0 percent, and former Justice Minister Choo Mi-ae with 3.0 percent were in order.

Thanks to the rising trend of former President Yoon and others, the total preference of conservative and opposition runners accounted for 50.2%, accounting for the majority. This is an increase of 4.3 percentage points from the previous survey. On the other hand, the total preference for Bumjinbo and passport was 43.0%, down 3.2 percentage points from the previous survey.