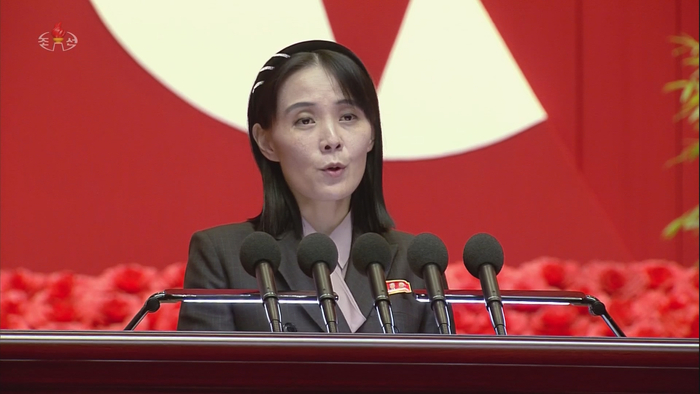 North Korean Chosun Central TV reported the next day that Kim Yeo-jeong, the younger sister of North Korean leader Kim Jong-un and vice minister of the Workers’ Party of Korea, gave a public speech as a debater at the National Emergency Prevention Conference on August 10. yunhap news

On the 24th, Kim Yeo-jeong, vice minister of the Workers’ Party of Korea, sister of North Korean leader Kim Jong-un, criticized President Yoon Seok-yeol, saying, “People don’t know why they are just watching the ‘regime’ where those idiots sit in and keep creating a dangerous situation.”

In a statement released to the Chosun Central News Agency on the same day, Vice Minister Kim said, “On the 22nd, the South Korean Ministry of Foreign Affairs took the exercise of our right to self-defense as an expression of ‘provocation’, and as much as it continued, it was revealed that additional ‘autonomous sanctions’ measures were being considered. It blew,” he said.

Vice Minister Kim’s discourse comes two days after he criticized the United States for leading the movement to condemn North Korea’s intercontinental ballistic missile (ICBM) launch at the UN Security Council on the 22nd. This time Vice Minister Kim aimed directly at South Korea and President Yoon with high-level horse bombs. Vice Minister Kim criticized President Yoon for proposing a ‘bold idea’, a roadmap for denuclearization of North Korea, in August, saying, “We hate Yoon Seok-yeol as a human being.”

Deputy Director Kim argued, “Seeing the disgusting insolence of the South Koreans, who are busy talking about ‘autonomous sanctions’ on the DPRK without missing a single vomit, it becomes more clear that they are the ‘loyal dogs’ and henchmen of the U.S., who have nowhere to go.”

Vice Minister Kim said, “I can’t help but be stunned every time I see those South Korean henchmen playing.” ‘I’m really looking at it, but now I’m seeing all the stars,” he said.

Deputy Director Kim said, “If the master and Ju-gu still feel that attachment to useless things or the same ‘sanctions’, then try it a hundred times or a thousand times to your heart’s content in the future.” If you rolled , you are a real idiot.” At the same time, he said, “I was an idiot because I didn’t know how to live safely and comfortably.”

Deputy Director Kim showed strong hostility to South Korea by mentioning the time when former President Moon Jae-in was in power in the past. He insisted, “Still, when Moon Jae-in was sitting and eating, at least Seoul was not our target.”

Vice Minister Kim said, “I warn the impudent and ignorant ones once again.” will be,” he said.

It can be interpreted that it intends to continue its military provocations by using the sanctions imposed by South Korea on its own that have yet to materialize and the promotion of sanctions at the UN Security Council level as an excuse. On the 29th, on the 5th anniversary of Chairman Kim’s declaration of the “completion of the state nuclear force,” prospects have been raised that North Korea may launch additional ICBMs with the goal of improving performance.

In a statement two days ago, Vice Minister Kim hinted at provocation, saying, “We will never tolerate anyone who disputes the exercise of the right to self-defense to protect national security, and we will take an ultra-strong response to the end.”

Deputy Director Kim’s intention to encourage ‘South-South conflict’ by even mentioning the attitude of the South Korean people towards the Yoon Seok-yeol government is also hinted at. It is also interpreted as reaffirming the keynote of the confrontation between the two Koreas, saying that the situation has changed from the time of the Moon Jae-in administration.

Starting from 2025..the government agrees to assign doctors, pharmacists, and nurses according to need

A possible rise of 50 bp in December is confirmed. Buys Jump By Investing.com