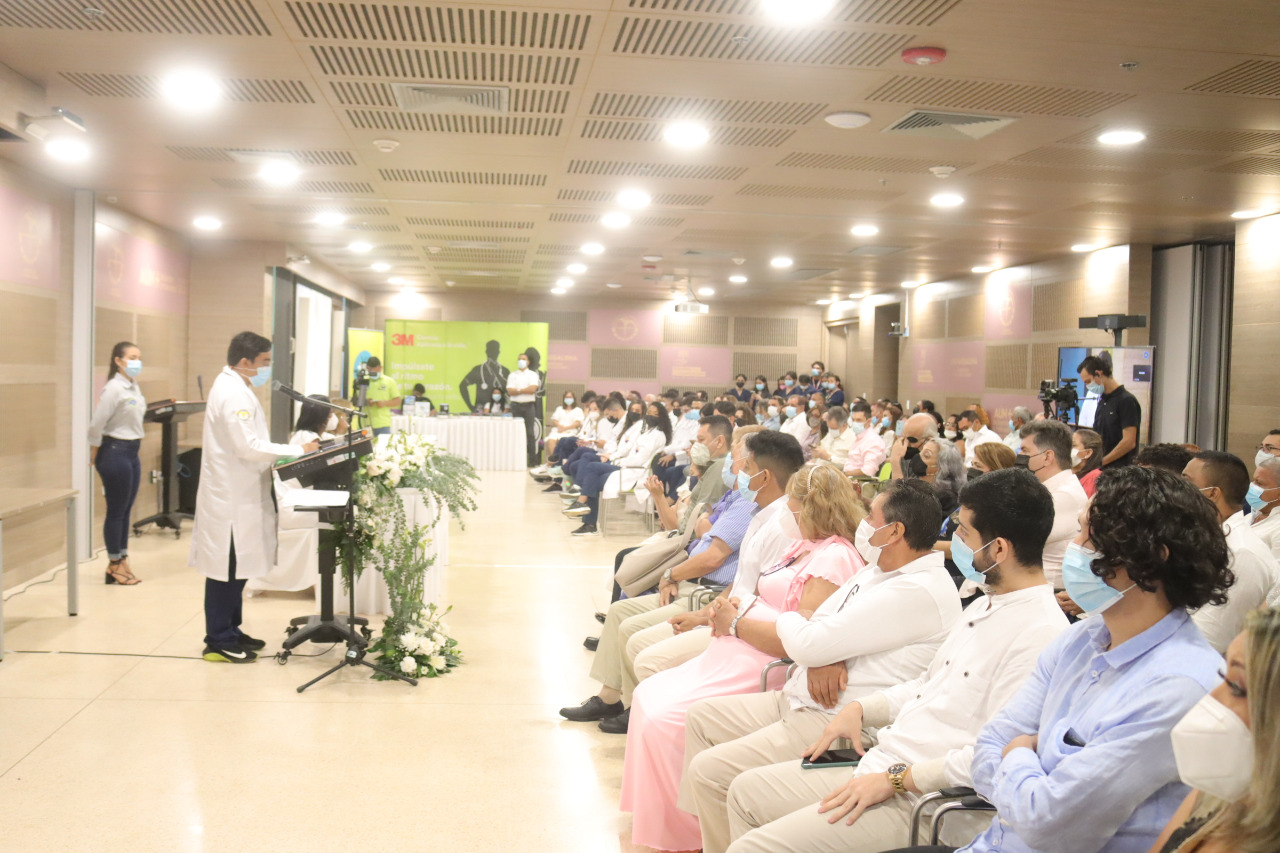 An emotional and special ceremony was held by the Universidad del Magdalena to mark the transition of 19 tenth-semester students of the Medicine Program towards their professional practices.

It was an act of imposition of white coats, where the future doctors received from their teachers the garment that represents the purity of their professional practice and the power to intervene with ethics and humanism in the lives of other human beings.

The ceremony was presided over by Ángela Romero Cárdenas, dean of the Faculty of Health Sciences; María Meñaca Guerrero, director of the Medicine Program and María Acosta Convers, professor of this academic unit.

“Show society that new medical professional that you are going to be, that you have ethical, moral, scientific and humanistic criteria. We are going to bring about change in this society that requires support”, said Dean Romero Cárdenas at the opening of the ceremony.

Likewise, the director of the Faculty highlighted that it is the first time that Alma Mater students will develop their rotating internship at the General Hospital of Medellín and the Cardiovascular Foundation of Colombia in Bucaramanga, as a result of teaching-service agreements reached by the Program .

Young people will also put their knowledge into practice in institutions that provide health services in the country, such as the Julio Méndez Barreneche University Hospital, Rosario Pumarejo de López Hospital, ESE Universidad del Atlántico, Avidanti Clinic, and the Valle and Cartagena universities.

This event was conducive for the new medical interns to recall the principles of their professional training, which, over 10 semesters, is characterized by fostering a high degree of social commitment and relevance in promotion, prevention, treatment and rehabilitation, with a hallmark: the comprehensive approach to the patient and their environment from the family health approach.

“The knowledge acquired at the University aims to reach the communities. It is important because they have been part of the personal and professional growth”, assured the student Zeynara Zapata Izquierdo, belonging to the Jwerwa indigenous community, who after receiving her gown pondered the importance of academic and ancestral knowledge coming together in favor of native populations of the territory.

Relatives were also present at the event who recalled the efforts of young people to reach this stage. “They have already left the notebooks and the notes, to live medicine as such. They were long nights of late nights, they took turns, some slept while the others replaced them”, recalled Johanna Barrios Antolínez, mother of student Diana Capacho.

Likewise, they proudly highlighted the High Quality Accreditation that the Medicine Program received at the end of 2021, which has opened numerous doors for the benefit of the academic and professional development of future doctors.

In the event, a recognition was also given to the student Sofía Castillo Pazo for her good academic performance during her career.

After the horror of an Egyptian family because of a drug with a drink… This is what the company said to Al Arabiya.net

Sweden classifies the monkeypox virus as a “dangerous disease”.