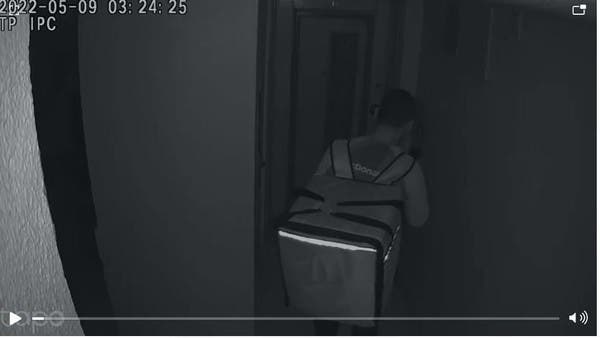 After the publication of “Al Arabiya Net” A terrifying video clip of an Egyptian family I was exposed to a strange incident and was documented by a surveillance camera of a young man from the delivery workers, who was inserting a drug in a soft drink can. The famous company that owns the restaurant responded and clarified the details.

The company, “Manfoods Egypt”, the owner of the “McDonald’s” restaurant, said in an official letter to “Al Arabiya.net” that the security authorities dealt with the incident, and revealed and proved that the worker had wiretapped the apartment of the customer, who was not subjected to any damage, and the latter expressed his desire not to write a report on the incident.

The company revealed that it had taken decisive measures against the worker in accordance with the sanctions regulations, and provided all means of support and assistance to the customer in order to preserve his rights.

For its part, the Ministry of Interior revealed the details of the incident, and said that it monitored the video in which a delivery worker in a restaurant located in the Basateen Police Department, south of Cairo, peeped from behind the door of an apartment at a restaurant customer after he delivered the order, as well as indicating that the worker Posing a drug in the meal with intent to steal.

She said that by examining and inquiring from the restaurant, it was found that the delivery worker was residing in the Al-Ayat police station in Giza, and the request to be delivered to the residence of a contractor, residing in the New Maadi area in Cairo, adding that, by asking the latter, he stated that he did not want to write a report on the incident, and that he was not exposed to any damage. .

She added that the customer made a “phone” complaint to the restaurant’s management after seeing the delivery worker after he delivered the order, tapping the door of his apartment.

The Egyptian Ministry of Interior stated that after codifying the procedures, the worker was arrested, and by confronting him, he admitted that after submitting the request, he tapped the apartment door as a form of intrusion and left, noting that the necessary legal measures were taken.

A distress was agitated by social media platforms, accompanied by videos documenting what the delivery worker did to a famous restaurant while delivering a meal to a customer.

In the details, an account of a girl named Heba Mohamed, who lives in the Maadi area, south of the Egyptian capital Cairo, posted a video of the worker trying to steal her husband’s brother’s apartment.

She explained that the worker kept snooping and waiting in front of the apartment door after submitting the application and receiving his account, and the apartment’s surveillance cameras sent warning messages on the mobile phone. Here, as she says, her husband’s brother paid attention, and when they rushed and opened the apartment door to see what was going on outside, he was surprised by the worker fleeing.

The owner of the video explains that the surveillance camera revealed that the worker had put a drug in soft drinks and was accompanied by another person to help him rob the apartment after making sure the customer was sleeping. And if it weren’t for the surveillance cameras that issued a warning alarm, the disaster would have occurred.

She stated that she tried to communicate with the restaurant, but to no avail, adding that she asked at least to know the name of the worker to pursue him away from his management, but her request was not answered.

The incident received a great deal of interaction on the communication sites, and the tweeters demanded to boycott the restaurant and not deal with it until he advises the worker, and they also demanded caution and take all precautions when dealing with delivery workers.