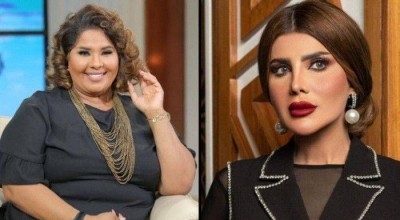 Al-Marsad newspaper: A war of words erupted on social networks again between the two Kuwaiti artists, Ilham Al-Fadala and Haya Al-Shuaibi, after the latter entered the Kingdom.

And Al-Shuaibi said during a video: “God suffices for those who wronged me and was the reason for keeping me away from you for this period, and if I am wrong about anyone, Hayuna tells you that she loves you, and apologizes from her heart if there is something wrong with it.”

And she continued, “I am complaining about what it usually means.” In reference to the inspiration of virtue.

Al-Shuaibi accused Al-Fadala of cheating her audience, saying: “She buys counterfeit goods from Turkey and suggests to her followers that it is authentic.”

Al-Fadala replied: “Now, the fake accounts, how many people can equal two three fives? Not a million people showered! My work and my work, if I had not oppressed her and upset her from what I heard today, nor would I have come to speak.”

And she continued: “But you accuse my friend who visited me and accuse her of being strange, why is she wearing a veil, the niqab has become strange? If you don’t respect me and know what you respect me, respect the guest dashboard, Dirtje, strangeness, strangeness and insults in it and the smell of her monastery, respect her at least, but only halal girl.”

And Ilham Al-Fadala concluded by saying: “Even the journalist’s predecessor, which I settled with, I have the messages and the words that I wrote and I have everything.

NASA’s DART mission aims to save the world