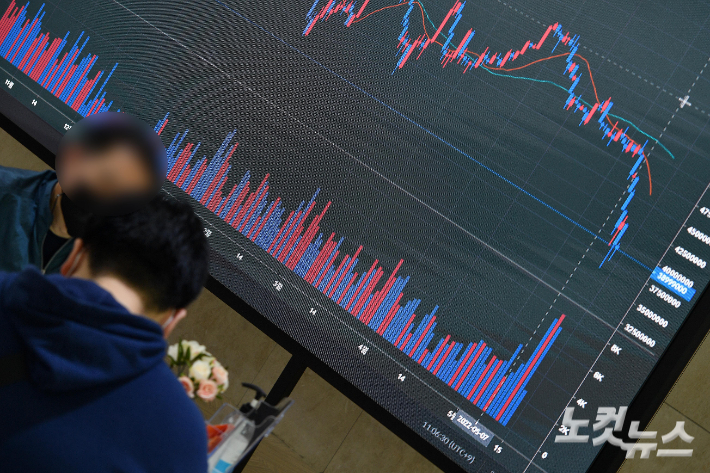 The Wall Street Journal (WSJ) diagnosed that the reason the cryptocurrency market fell into the worst recession was due to the shift to tightening stance by central banks in each country amid concerns about inflation and the decoupling of some stablecoins. Reporter Park Jong-min

Self-employed person A in his 40s started investing in this coin around August of last year, when the price of the cryptocurrency Luna per unit rose to 20,000 won on a domestic exchange. Even after receiving an acquaintance’s recommendation to invest in Luna a month ago, he hesitated at the thought that ‘coins have no substance’, but as the price more than doubled in just a few weeks, he took out the 5 million won he had saved and jumped into investing.

Person A said, “Even after the first investment, the price rose rapidly, so I continued to purchase additional purchases, and eventually the investment grew to 50 million won.” “The average purchase price was around 40,000 won, At one time, it was over 100 million won,” he said. He also benefited from entrusting his Luna to a decentralized financial service called ‘Anchor Protocol’, but it is said that this became poisonous during the Lunar crash. Mr. A said, “I was trying to sell quickly, but I got stuck because it took more than 20 days to clear the deposit. So in the end, I couldn’t save a single penny.”

The aftermath of the collapse of the Korean cryptocurrency Luna and the stable coin Terra USD (UST) is painful. Luna and UST have become practically worthless pieces of tissue paper, giving a huge shock to the global cryptocurrency market. Investors, like Mr. A, who were aiming for market profit by paying debts, are still unable to get out of the ‘panic’.

Terra. yunhap news
Terra, designed to be pegged to one dollar per coin, plummeted in value below one dollar, and then its sister coin, Luna, also plummeted in value, causing great chaos in the cryptocurrency market. According to the white paper, Terra is a so-called ‘stable (stable) coin’ designed to maintain the value of one dollar per unit, and Luna is a coin used to maintain the value of Terra. For example, if the value of 1 Terra drops to $0.9, the investor can exchange it for $1 worth of Luna, profiting from it. When investors deposit coins in the ‘anchor protocol’, a method of providing a high interest rate of close to 20% was also applied. However, this has been consistently criticized as a ‘Ponzi scam’.

Mr. A said, “It hurts that I just invested without knowing why the price of Luna went up and down, and I didn’t even know what the value of the coin was. The money to buy a house flew away.” It feels like I’m back to who I am. Isn’t the world going to normalize?” he smiled bitterly.

Office worker B (29), who invested 30 million won in Luna Coin and eventually lost it all, is also burnt in heart. Now that he gets angry just looking at the cryptocurrency exchange app, he explained that when the savings he had poured 500,000 won a month in, he wanted to make a little more profit, so he listened to his friend and invested all in coins. But now he regrets his choice. Mr. B sighed, “Of course, people only see the good side at first. That’s why I didn’t think about it (such as stability). Now that I think about it, I only think, ‘Am I crazy?'” he sighed.

During the corona crisis, overflowing liquidity flowed into the asset market, and in the process, the virtual currency market grew rapidly. As such, damage is occurring all over the place. In particular, the younger generation, who make up half of virtual currency investors, is particularly hard hit. This is because there are many of these people who lost the opportunity to call their assets in the real estate and stock market surge last year and became a ‘crazy beggar’, and then entered the virtual currency market as a ‘young-chul’, aiming for a comeback.

Cryptocurrencies are also highly volatile in price. There are 623 types of virtual currencies circulating in Korea, and about half of the virtual currencies listed alone in the second half of last year had a price drop rate (MDD) of more than 70% from their average peak. Compared to the KOSPI’s MDD of 14.8% during the same period, price volatility is very high.

The number of members of the internet cafe ‘Terra Luna Coin Victims’ recently exceeded 26,000. Various virtual currency related internet cafes are overflowing with voices complaining about damage. On the bulletin board, there were a series of damage cases such as borrowing 50 million won and losing all of it when an acquaintance said that they had fun with coins, or investing in Luna with previous experience of investing in virtual currency and falling endlessly.

yunhap news
Although there are a lot of people who have suffered irreparable losses, there are those who jump into the crash zone saying, “Now is the trough.”

C, who identified himself as an office worker in his 40s, said he lost 30 million won in Luna coins, but said, “I will see opportunities when I have extra money.” He did not give up hope, saying, “I wonder if I will endure another two or three years. I don’t know what will happen after two or three years.”

Meanwhile, the financial industry seems to be keenly aware that the Luna-Tera crisis may lead to difficulties in repaying bank loans. A commercial bank official said, “The young generation in their 20s and 40s, who have borrowed debt or invested all their extra money, account for half (of investors). “He said. It seems difficult to come up with countermeasures because it is difficult to accurately determine the size of the virtual currency insolvency or the source of funds.