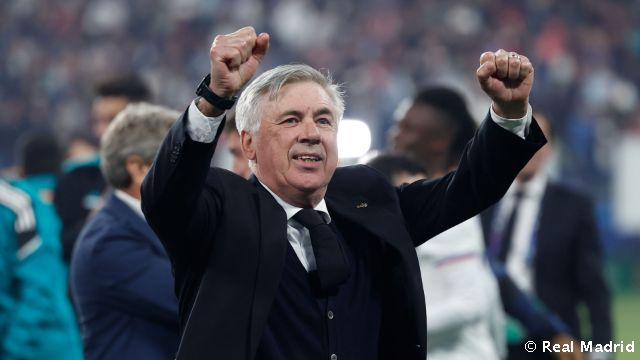 “Winning the Champions League with Real Madrid is easier compared to other teams thanks to its history and the dedication of its fans,” said the madridista coach.

a necklace Carlo Ancelotti A press conference at the Stade de France after the team’s victory 14th Continental Cup At the expense of Liverpool: “This European Cup was the most difficult. The fact that people thought we couldn’t win helped us because it gave the team more confidence, commitment and desire to fight. The atmosphere was good. Individual qualities made the difference. We deserved to win this Champions League title. We have suffered a lot since the knockout stage but we have never given up.”

“We managed the game well. The key was to give depth to the attack. The four players at the back did well because Liverpool didn’t send balls back. When they reduced the pressure, we managed the game better. Liverpool have not lost many games this season.”

The club and the crowd

‘Win a title Champions League with Real Madrid Easier compared to other teams thanks to his history and the dedication of his fans. We have great fans, a love for Real Madrid grew in their hearts from a young age. The club’s structure makes it stand out. I am happy to have won the Champions League four times, but I am even happier to be back at Real Madrid. We had a great season. I am grateful to the president and I will never stop thanking him or Jose Angel and the players for the beautiful atmosphere they were keen to provide.”

“I focus on the good atmosphere we lived in. It’s difficult to create that kind of atmosphere because sometimes we are arrogant or because there are players who are not playing and complaining. I highlight my happiness with coaching this team and the calmness in the dressing room in preparation for the match, which was delayed. In those moments it was The players are completely calm and full of confidence. Confidence comes thanks to the history of this club. They are victories in eight consecutive finals and this is very rare because Champion’s League Europe A very competitive competition.”

“Coming back to Real Madrid was a huge success and at this point I didn’t think about the titles I won. I thank the fans for the support. I said to Courtois I’m going to take him to the final, but he’s going to have to win it and that’s what he did. can’t say no To Real Madrid“.

“The only thing that helped me Vinnie Junior It is trust. He has improved in effectiveness in front of goal, and the rest remains the same, such as dribbling, for example. It is very effective in this aspect. It needs time and calm. help him Benzema and confidence Real Madrid also. Today he crowned his season and finished the season in great shape.”

“I want to take a vacation and then start next season. I have to enjoy this moment because it was a huge season. I didn’t think about all that, about this victory and winning three titles: Super Cup، league AndChampions League“.

“In the Paris Saint-Germain, Chelsea and City matches, there were a lot of doubts. Today’s match was difficult, but not that difficult because we did not have to implement a remontada. The players had no doubts because they did not lose faith. We suffered in the first half, but we controlled.” .