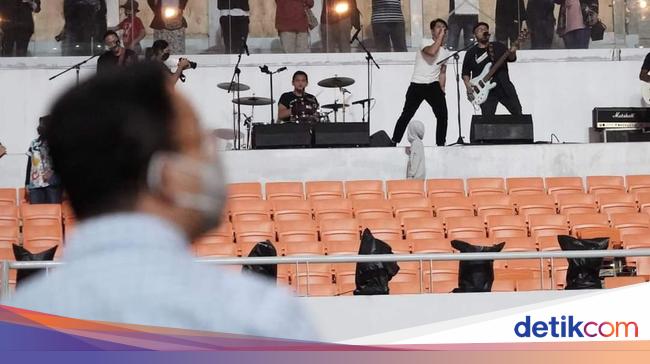 Judging by Anies’ upload on Facebook, Nidji appeared at JIS for a test run sound system international standard stadium. From some of the photos uploaded, Anies seemed to witness Nidji’s performance with a number of people, including JIS workers.

On that occasion, Anies also reviewed the development of the FIFA-standard stadium. He then praised Nidji’s appearance.

“The music is blaring, the voice is melodious, there are no discordance,” he said Anies.

For information, the vocalist of the band Nidji was originally Giring Ganesha. However, his decision to enter politics by joining the Indonesian Solidarity Party (PSI) led to Yusuf Ubay’s current position being replaced.

Previously reported, the construction of the Jakarta International Stadium (JIS) has reached 93.85%. Although the construction has not been completed, the JIS area can be visited by the general public until March 2022.

People who want to visit JIS can register first by accessing the link https://bit.ly/kunjunganJIS. Visits are only open every Tuesday at 15-17.00 WIB.

Arry said, this activity is a form of enthusiasm Anies Baswedan so that JIS development can be seen by various levels of society.

“Because of the governor’s enthusiasm for development, you can feel the echo of the same information reaching the community, to the lowest roots,” he said.

For the sales, the Acer Nitro 5 gaming laptop with Core i7 and RTX 3070 is at a canon price

By winning the Supercup with Real, Marcelo equals a prestigious record