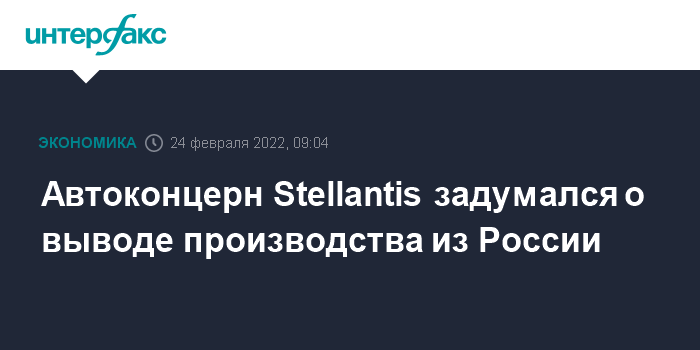 Moscow. 24 February. INTERFAX.RU – The auto concern Stellantis, formed a year ago as a result of the merger of the Italian-American Fiat Chrysler Automobiles (FCA) and the French PSA Group, allows the transfer of production from Russia in the event of negative consequences due to sanctions, writes The Wall Street Journal (WSJ) with a reference to the head of the concern, Carlos Tavares.

The main production asset of the Stellantis group in Russia is the PSMA Rus plant, located in the Kaluga industrial park Rosva, which has been producing full-cycle cars since 2012. Investment in the project was reported to be at the level of 550 million euros. Stellantis owns 70% of the company’s shares, another 30% belongs to Mitsubishi. The plant produces passenger cars Peugeot 408 and Citroen C4, light commercial vehicles Peugeot, Opel and Citroen, as well as mini-vans and compact vans Peugeot Partner, Citroen Berlingo and Opel Combo. Mitsubishi assembles Outlander and Pajero Sport SUVs at the facilities of PSMA Rus.

According to the WSJ, on the eve of Tavares said that he was not yet sure how the sanctions could affect the production of Stellantis at the Kaluga plant. From the message of the publication it follows that the statements were made on Wednesday, it was about the possible consequences of sanctions in connection with the recognition of the DPR and LPR.

“If the reality is that we will not be able to supply the plant, we will be forced to either transfer this production to other plants, or face restrictions,” Tavares was quoted as saying.

WSJ recalls that in 2021, production at the plant in Kaluga doubled, reaching 11,000 light commercial vehicles. Since the end of last year, the plant has increased production for export to Western Europe, began assembling Peugeot Expert, Opel Vivaro and Citroen Jumpy for export markets. In addition, Stellantis announced that in 2022 Russia would start assembling manual transmissions and Fiat Scudo cars for export.

Tavares, who is due to unveil Stellantis’ 2030 strategy next week, said geopolitical risks are affecting how the company makes decisions going forward. “Over the past decades, the automotive industry has been influenced by geopolitics many times,” Tavares was quoted as saying by the WSJ.

According to the Association of European Businesses (AEB), sales of Stellantis in Russia in 2021 increased by 64.7%, to 18,526 vehicles.

a gas voucher, a petrol discount, for whom?