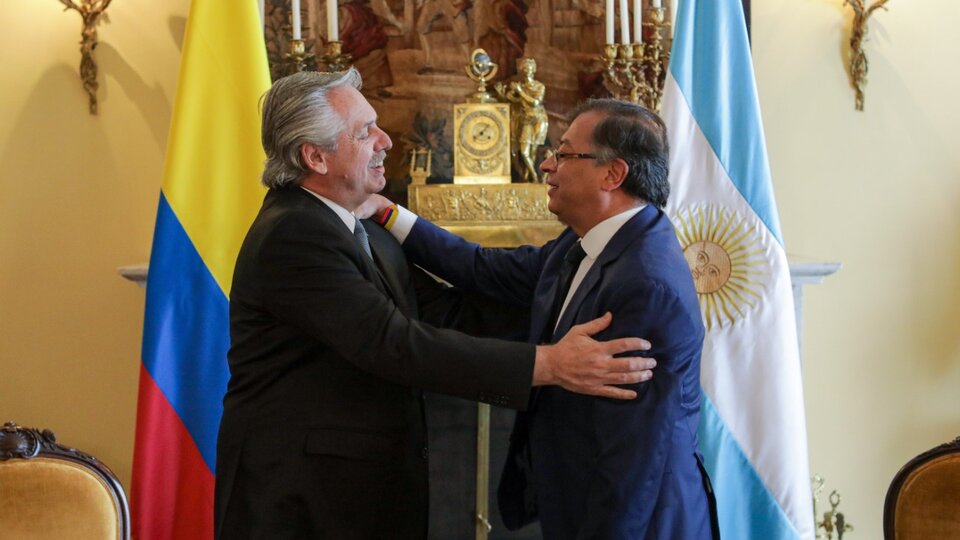 The capital city of Colombia, which turned 484 on Saturday, for the first time in its history fills the Plaza de Bolívar with the people participating in the investiture of the new president, Gustavo Petro. This Sunday, in the hours prior to the inauguration, Petro received President Alberto Fernández at the Private House of the San Carlos Palace, where the liberator Simón Bolívar lived. Fernández gave him the permanent support of Argentina for the great challenge that the new president has to achieve total peace, with all the actors in the armed conflict.

Fernández valued Petro’s decision to resume dialogue with the National Liberation Army (ELN) and conveyed Argentina’s willingness to accompany the process towards an end to violence, after six decades of war. “We have carefully followed the proposals and guidelines to achieve total peace, both during the electoral campaign and after the victory. We are determined to continue and strengthen Argentina’s commitment and support for peace in Colombia”, said the President.

Along these lines, he underlined a specific aspect of the process. “We are going to maintain our presence in the United Nations Verification Mission in the Republic of Colombia (UNMVC), which we have been part of since its inception.”

And it is that the Colombian Truth Commission presented last Friday the Final Report in the Cultural Center of Memory “Haroldo Conti”, of the ExEsma. A sample of how the human rights organizations of neighboring countries are related in the search for reparation.

Likewise, Fernández, who chairs the Community of Latin American and Caribbean States (CELAC), informed the new Colombian president of his interest in “dialogue and identifying common interests to achieve projects that make up the next Cooperation Program.” That is, “a roadmap that reflects the interests of joint work.”

The President highlighted the important potential to expand and diversify the economic and bilateral relationship, “in sectors such as food, automotive, agricultural machinery and the pharmaceutical industry, as well as in regard to cultural industries and services.” And more: the issue of climate change and renewable energies, one of the promises of the green agenda of the incoming government of Colombia.

Fernández and Petro agreed that Latin America has to coordinate to strengthen organizations such as CELAC, as well as bring Colombia closer to Mercosur, in times of global economic turmoil. Both discussed the impacts of the war in Ukraine and the pandemic on the crisis in the region.

For decades, Colombia was governed by a right wing that maintained a foreign policy strongly aligned with the United States. For years, the northern country financed Plan Colombia to fight drug trafficking and insurgency. After the peace accords in Havana, Washington backed Bogotá under the name Paz Colombia.

It is in this new context that opens with the investiture of Petro that Fernández was hopeful. “We need an active Colombia on the path of Latin American integration.” And surely the reestablishment of relations between Colombia and Venezuela is part of the way, after years of estrangement between two countries that share 2,200 kilometers of border.

Fernández invited the new Colombian president to make an official visit to Argentina in the coming months. A meeting of CELAC foreign ministers is scheduled for October and a summit of presidents for December.

On Saturday, Fernández held bilateral meetings with his counterparts from Honduras, Xiomara Castro, and Bolivia, Luis Arce. In addition, he participated in a meeting with the Puebla Group, which was attended by the former president of Brazil, Dilma Rousseff; and the former presidents of Colombia, Ernesto Samper, and Paraguay, Fernando Lugo. Today Colombia joins the new progressive wave in the region.

The earth rotates faster than it should… and the length of days is decreasing!