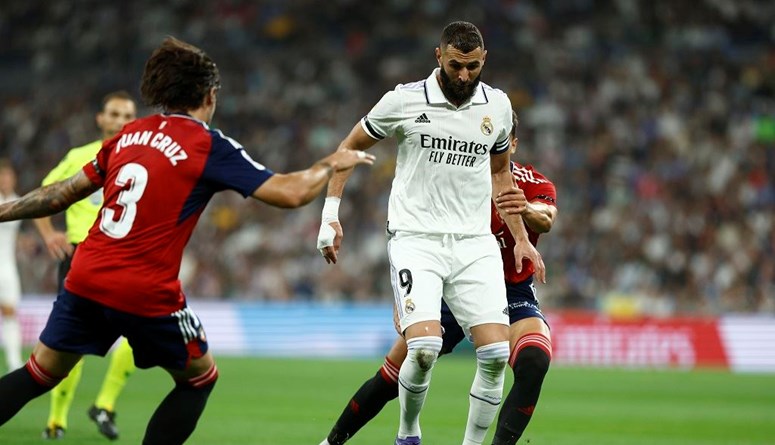 French international striker Karim Benzema missed a decisive penalty kick with his return to the competitions to prevent Real Madrid from regaining the top spot in the Spanish Football League from its rival Barcelona, ​​by being satisfied with a 1-1 draw with its guest Osasuna in the seventh stage of the competition.

Real advanced through the Brazilian Vinicius Junior at the end of the first half (42) before the guests equalized at the beginning of the second (50). Benzema Al-Ayid, after his absence for nearly a month, missed a decisive penalty kick, which he obtained himself, after his attempt bounced off the crossbar ten minutes before the end (79).

This is the first time that the royal team has wasted points this season, after six victories from the first six stages, to raise its score to 19 points in second place with a goal difference only from Barcelona, ​​the leader, who defeated Real Mallorca on Saturday with a Polish goal by Robert Lewandowski, knowing that the two rivals meet in the ninth stage on Santiago Bernabeu stadium in two weeks.

Benzema has been absent since the beginning of September due to an injury to his right thigh during Real Madrid’s victory over Scottish host Celtic in the Champions League, which prevented him from participating in the international window with his country.

‘I’m Solo’ 9th Youngja on Instagram, “Have you been hacked?”