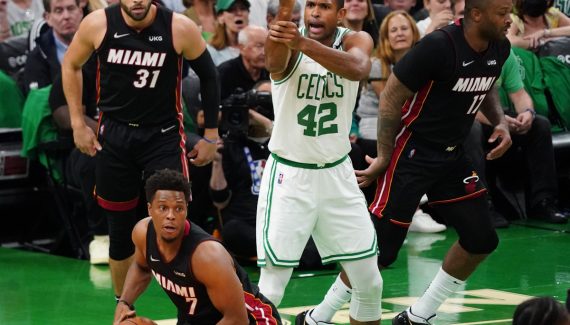 “We didn’t think it would all of a sudden be an easy series and they were going to fall apart. We bounced back from game one to game two and we knew they were going to do the same.”, highlighted Ime Udoka. “For some reason that escapes me, we weren’t up to par at the start of the game.”

The conference final between Miami and Boston has been a playoff story so far. In Game 3, it was Miami who took their revenge for the affront of the previous match, unfolding their game in front of a dumbfounded TD Garden. The reaction of the Celtics, before the break and after returning from the locker room, was ultimately not enough to reverse the trend, and the Heat regained control of the series (103-109).

As a good veteran, Al Horford wanted to congratulate the Floridians for their reaction and is already awaiting that of his team during Game 4 which will still take place in Boston.

“You just have to congratulate them. They arrived like a wounded animal. They fought. For some reason, we didn’t have that same sense of urgency.”, he lamented after the game. “I can’t wait to watch the video of the game with the guys. We’ll see what we can do, what we can improve, how we can be better, and we’ll stick with that. We have to understand that we have to be better, it’s as simple as that. We need to come back with a greater sense of urgency.”

Were the Celtics paralyzed by the stakes for their home series opener? Or is it the big Game 2 performance that unconsciously played on people’s minds? The next match will be an opportunity to get a clearer idea.

“I feel like coming home you tend to relax a bit, and I feel like that’s what we did at the start of the game, before we started to get into it. player. But you can’t catch that many points from a team like that. It’s difficult. Despite that, I think we were in a position to win the game in the end.” added Al Horford. “We’re excited to be here, to have our fans stepping up for us, but we just need to be more consistent at home and arrive on the pitch with the right sense of urgency. It is something that we have to improve from Monday”.

As they did in Game 2, the Celtics shone at the end of the season with their ability to react. This will therefore be expected in Game 4 on Monday evening.

“Miami is a hard-playing team that’s going to make it tough. But coach Udoka has done a good job with us all year finding the right adjustments, and especially in the playoffs, from one game to another. We see the things that we need to correct. This is what I expect us to do on Monday”concluded Al Horford.

This is what happens to your body when you eat lupine daily! • Al Marsad newspaper

Condusef alerts for fraud in false bonus to bank account