“Here is Bret! What a look for God! “, He said Marcelo tinelli and received Poison in the study greater than Telefe. It was 1993 and the hard rock band that had already been on the road for more than a decade was still riding the crest of the wave. “Every Rose Has Its Thorn” It was the theme with which they opened a problematic and unforgettable set, and thus, in Spanish, it was presented by the host. “Every Rose Has It’s Thorn” started ringing, arms on the rostrum raised, everyone sang the song, a slow to fall in love like Otto when he proposed to Becky in an old chapter of the Simpsons. Poison’s romance with Rhythm of the Night it was going to last a little while, until the chaos finished taking over, a little as it happened with Otto Y Becky in the animated series.

Bret Michaels came from filling two Sanitary Works stadiums and that night on Telefe he tried his leopard skin jacket on Tinelli, while the sports journalist Felipe Mc Gough (who was part of the cycle’s permanent staff) simultaneously translated short phrases such as “this audience is crazy” or “fucking motherfuckin”. About the end of “Unskinny Bop” the weather began to grow thin, the Poisons fluttered the odd guitar, the microphone stand, and Bret ended up wallowing in the drums that were falling.

In the end they all ran behind the set, while Poison’s music was mixed with one of the jingles from the program: “One night is one night and the rhythm starts again…”. Tinelli laughed nervously: “They broke everything,” said the driver, and showed the remains of the instruments that – he still did not know – would have to pay for their production, since they were on loan.

That night on that Argentine television set it was a summary of what Bret Michaels was inside Poison: seduction, rock and roll and destruction. In his autobiography Auto-Scrap-Ography the singer defined: “We started as a garage band with Rikki Rockett, in the basement of my house. After we recruited other musicians, we traveled throughout much of the United States, constantly worried about paying our debts. Thus were the beginnings of Poison as a group. Our aesthetics, typical of the glam style, can be defined as an audiovisual party. We took what we found to wear; it was a combination of gypsy and the energy we felt on stage”. Together they were dynamite.

By the end of a decade in which they filled arenas and sold millions of records with their catchy, popular rock, Michaels began trying his luck as a solo artist while still touring with the band. His image had taken off from the group and a short romance with Pamela Anderson ended up catapulting him as an interesting figure for the American jet set. The accident aboard the Ferrari which cost him a couple of ribs and some teeth, also added guts, and contributed to his image as an indomitable rocker. When it seemed that his fame could begin to decline, the 2000s arrived. Against all odds, and while he was in a relationship with Kristi Lynn Gibson, the mother of his daughters Raine Elizabeth Y Jorja Blue, reinvented himself as a television star.

In 2007, Michaels was looking for his Rock of Love in VH1. The goal of the show was for the Poison frontman to find a woman who could follow his rock star lifestyle. Thus, was that dated 60 girls in three seasons, and although the singer ultimately chose Jes Rickless as your partner, Heather Chadwell, who had come second, also had his five minutes of fame. He also went on tour with her for different events and they maintained a convenient relationship for some time, until what was left of the reality show could no longer be squeezed out. Obviously, everything was for the cameras.

Chadwell began to air a little of that strange relationship with his supposed idol, in a podcast that another of the girlfriends of Michaels on the show, Lacey Sculls. Heather was blunt: “Right after the show ended, we did some events together and we were kind of friends, but I guess it was more related to work. Unless I had a $ 750 say hi, he wasn’t going to talk to me. So basically it was all business. So no, we don’t have a friendship. “

In 2010 things changed. It no longer mattered how many girls followed him and who he was staying with: his poor health played a trick on him. Michaels had a subarachnoid hemorrhage, which means he suffered bleeding at the base of his brainstem. When this happened, the musician was at his home in Scottsdale, Arizona, convalescing after having an appendix operation. In an interview published by Yahoo!, Bret described: “Pain is like an elephant climbing onto your skull. That’s what brain bleeding does. Pressure is what usually ends up killing you. I knew I was in trouble and my adrenaline – after years of multi-complication diabetes – skyrocketed. Could barely speak. I knew I had some kind of seizure because my facial muscles were saggy and that is not a good sign ”.

After those horrible sensations, the star was immediately taken to the emergency room, where they realized his condition and did a scan. “From there they took me to the hospital and I don’t remember anything about the next three days. When I returned, it was because a nurse was massaging my legs so that a clot would not form. I never thought I was going to experience something like this, ”he recalled regretfully.

The recovery was slow but it did not prevent him from returning to the ring, and the following years he joined the old guard of hard rock to go on tour and revive a style that continues to cause a sensation. Thus it arrived until 2020 together with Def Leppard, Mötley Crüe Y Joan Jett & The Blackhearts planning a kilometer tour that was stopped first because of his health and later because of the COVID-19 pandemic.

In a statement posted on her website earlier this year, Bret Michaels reported: “I will have to undergo a procedure to remove the skin cancer that was found after a recent biopsy. I am in the hands of incredible specialists who are positive to obtain excellent results ”. As if that were not enough, he also had a problem in his right shoulder. 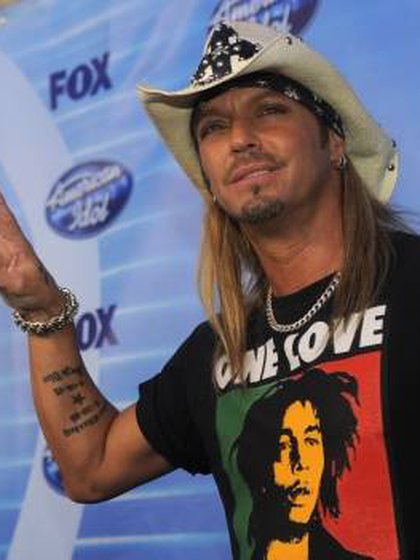 At 57, the musician battles for his health, but does not stop. Adulthood was also accompanied by a philanthropic side that not many know. The son of a Navy veteran, Bret visited an Air Force Base in October to support the US military. On that occasion he came to celebrate the opening of the first dental center on a military base.

The leader of Poison who usually contributes large donations and who that afternoon at the base distributed his autobiography among those present, He has also been to Iraq, Afghanistan, Kuwait and Abu Dhabi visiting the troops at the head of his Life Rocks Foundation. “What a great honor it is to support our Army. As the son of a veteran, there are not enough words to thank our service members and their families for their service and the freedoms they provide us, ”he stated. Solidarity is another aspect that he has developed over the years and where he has been able to use his fame and his connections to help others, in particular people with diabetes like him and children who suffer from it.

Over the years, Michaels has been able to give meaning to that “every rose has its thorn, just like every night has its dawn.”

“Every Rose Has Its Thorn”, de Poison

Edward Norton: the best actor of his generation who stopped being summoned for unbearable

alone with Pedro Pascal, from The Mandalorian: “Star Wars reflects our reality as human beings”