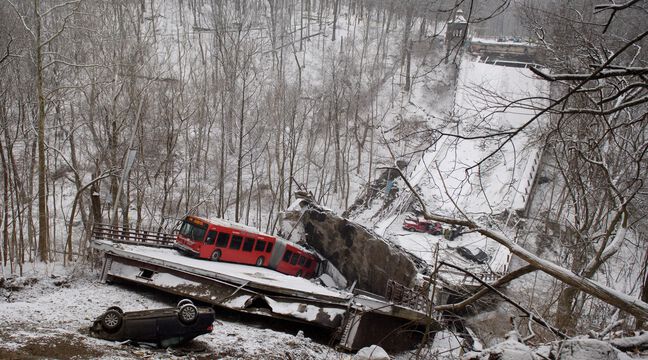 Three people, whose vital prognosis is not engaged, were taken to hospital, said the emergency services of this city, the second largest in the state of Pennsylvania (east) after Philadelphia. The first information available did not mention any victims. Local media evoke a dozen minor injuries.

Various motorists and vehicles, including a bellows bus, became trapped in the spectacular accident, according to photos posted on social media. The president has been informed of the collapse of the bridge and expresses his gratitude to the mobilized rescuers, said Jen Psaki, the spokeswoman for the White House. However, he will not change his program, she added.

According to his agenda transmitted by the White House, Joe Biden is to make an afternoon speech on his method to “strengthen the nation’s supply chains, reinvigorate the industrial sector, create well-paying and union-protected jobs and building a new America, including through the bipartisan-backed Infrastructure Act.”

Biden and the bridges

The coincidence is striking: on January 20, to mark his first anniversary in the White House, Joe Biden had precisely chosen to praise this law by speaking in front of a large panel on which were projected photos… of bridges in poor condition. The grand $1.2 trillion infrastructure spending plan passed by the US Congress late last year, which even received some Republican opposition votes, is one of the few major successes to date. of the 46th President of the United States.

Trailing a mediocre confidence rating of around 40%, seeing legislative elections approaching which risk costing him his slim parliamentary majority in the fall, Joe Biden has promised to go more to meet Americans. After spending a year promising great economic and social upheaval in the United States, the White House was forced to scale back its ambitions. But also to adapt its communication, in the face of Americans who are struggling with historic inflation and a new wave of the pandemic.

In this context, the president’s major projects seem far removed from their daily concerns. After the law on infrastructure, and failing to have been able to pass a very ambitious social law of 1.750 billion dollars, the president is seeking to save at least a few reforms, in particular aid for childcare, or expenditure for the energy transition.

To rally the centrist Democrats who do not want too much expansion of the welfare state, the president now speaks instead of a plan intended to “put Americans to work” and boost the country’s competitiveness.

Hey there, your happiness.. Benefits of Banque du Caire 2022 certificates Learn about the types and features of savings certificates