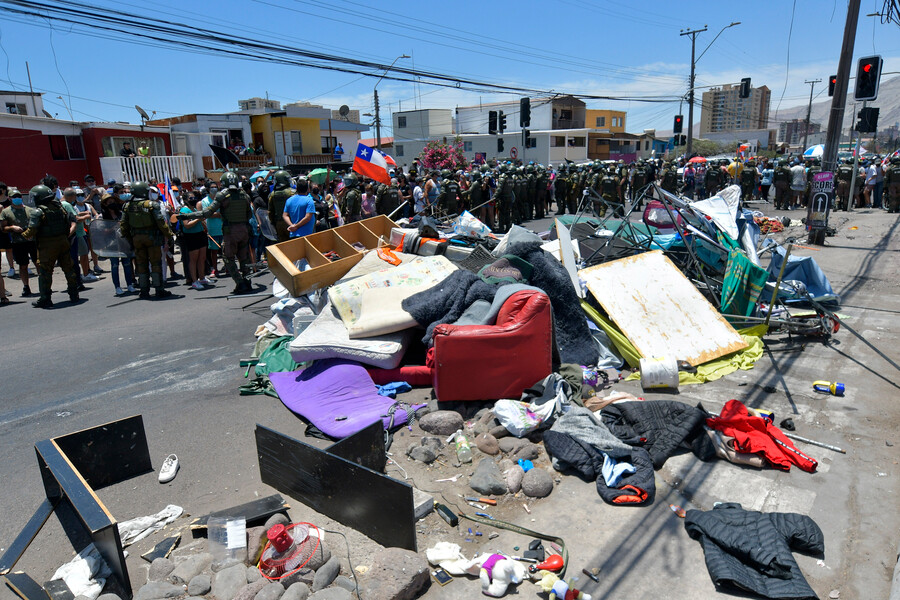 This Sunday, about four thousand people demonstrated in Iquique to demand the government solutions to the increase in violence and crime that affects the northern regions of the country, including Tarapacá.

During the development of the call, it was divided into two groups: one toured the traditional sectors of the city, while the other went directly to confront migrants who had tents set up on a piece of land located at the intersection of Calle Las Rosas with Avenida Aeropuerto.

A rather tense moment that led to municipal personnel had to remove part of the belongings of some affected. In fact, the authority was aware that this situation could occur.

“A group of those left behind (from the march) attended a certain sector of Iquique with the purpose of executing some type of maneuver, with respect to some Venezuelans who were already in that place with some tents erected, ”said the head of the Tarapacá de Carabineros zone, Ivan Monk.

“In that vein, we had prevented this situation by removing people from that place and only the tents remain,” he added.

In this sense, the municipality indicated -according to Third– that the people affected had previously been transferred to a shelter.

From the Government they assure that they are already taking measures to be able to generate greater security. “In the Airport sector with Las Rosas, coordinated work was also generated with the vacant lot company where a closure will also be carried out, in order to maintain and protect the safety of the neighbors and the perimeter of the sector,” he said. Noelia Garrido, coordinator of Public Security of the Tarapacá region.

A regional strike is called for this Monday, which has been supported by different areas of the city, including the club Iquique Sports.

“The Tarapacá region is currently experiencing an unprecedented migratory, health and crime crisis. As a representative sports institution in the region, We have decided to adhere to the so-called regional strike called for Monday, January 31”, expressed the group.

At the CPAM in Lille, “the 5th wave of Covid has exceeded contact tracing”

the “quasi-candidate” Macron tries to fly over the campaign