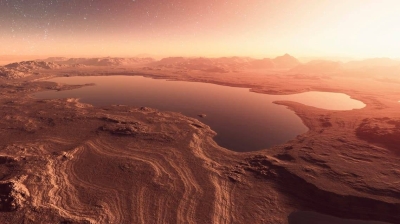 Al-Marsad Newspaper – Agencies: Many scientists have long believed that Mars had water 3 billion years ago when its second geological era known as the Hesperian era ended, but it disappeared during the current Amazonian era.

However, Chinese scientists announced a “amazing discovery”. They said that wet minerals detected by a Chinese robotic rover on Mars in a huge depression believed to be the site of an ancient ocean indicate that water has been present on the surface of this planet for a longer time than previously thought.

They also explained in a research paper published in the journal “Science Advances” that, according to an analysis of data sent by the Chorong rover spacecraft, indications of water were detected in mineral samples dating back only 700 million years.

In addition, they added, the mineral-containing soils found in the samples collected by Chorong had a hard crust that may have formed from rising groundwater or melting ice that has since evaporated.

Paul Magnette at La DH: “The PTB copies the PS, they are plagiarists and cowards”

burst! [email protected] broke up with girlfriend of 13 years