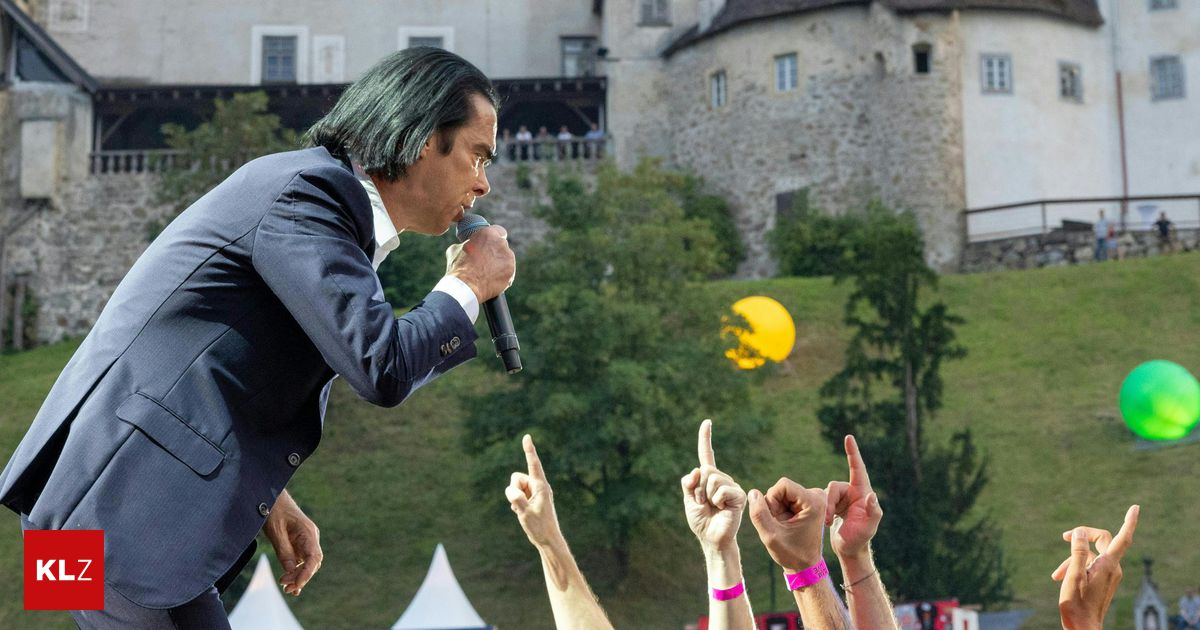 The weather matches what is to come: puffy thunderclouds are gathering, the sky is turning black. But the sun wins, the rain goes away. Clam Castle defiantly stands on the hill, down on the stage the mischievous slander and authentic storyteller Voodoo Jürgens and his Anserpaniers are at work as “stokers”. “Heat up the dead roughly, and then we hear Nick Cave, that fits well,” says the voodoo – and also disappears with a smile.

To make room for the man who enters the stage at 8 p.m. sharp, no, he takes over the stage with charismatic energy right from the start and then puts on an almost three-hour concert that further cements his status as an exceptional phenomenon: Nick Cave. The man in the black suit yells “Get ready for Love” into the crowd, the Bad Seeds sow the sound field, Warren Ellis, the shaggy master of ceremonies on guitar, violin and wonderful electronic instruments, directs the sound.

From the very beginning, Cave offensively seeks closeness to the people, the direct contact, throws himself again and again into the outstretched arms of the audience. In the front rows, the 64-year-old, who is often labeled the prince of darkness, is celebrated with a somewhat disturbing hysteria like the Messiah, who is supposed to bring salvation, which he himself is so desperately looking for. The ecstatic celebration is sometimes reminiscent of a gospel mass, of the high mass of a God-skeptical itinerant preacher.

Cave staggers breathlessly into this concert, only later does it calm down. “There goes my beautiful world”, an ecstatic “From here to Eternity”, the intensity of this presence is almost unbelievable. Cave enters “Jubilee Street”, staggers wildly after “Tupelo”, the deadly “Mersey Seat” is waiting, he keeps taking full baths in the crowd, occasionally sitting down at the piano. “Waiting for you” nestles into the night. The dirge for the deceased son, only recently Cave lost a second. This man who sings so much about pain has experienced so much of it firsthand. A possible therapeutic agent: “Into my arms”.

The weather is holding, the high mass is coming to an end. “Can you feel my heartbeat,” Cave keeps asking. Boom-boom-boom. Yes, you could feel the heartbeat. From the Old Testament rumble of thunder to the song of love, all of this is contained in this music. Anger, accusation, guilt, reconciliation, doubt, search for God, longing for salvation, self-discovery and self-knowledge. “Tender Prey” is the name of a 1988 Cave album. Tender prayer. That’s a good thing.

A Nintendo Switch Pro for next year?