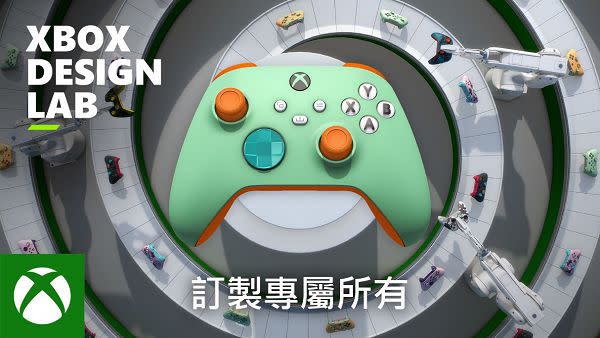 [Reported by Ke Zongxin]When players are looking for a game controller that is easy to use and install, many netizens in the discussion area will directly recommend “Xbox”, which is easy to use and even has the reputation of “the game console delayed controller manufacturer”. Now Microsoft Xbox Taiwan has finally announced that the long-awaited “Xbox Design Lab” wireless controller customization service has officially landed in Taiwan from today (4th). Engraving and other services to create an exclusive personal wireless controller. The wireless controller purchased through the Xbox Design Lab starts at NT$1,990, and Xbox Taiwan will also plan a special raffle in the community.

The Xbox Wireless Controller pairs quickly with Xbox Series X|S, Xbox One, Windows 10/11 PC, Android, and iOS devices via Xbox Wireless and Bluetooth, and the Xbox Wireless Controller is always there for console, PC, and mobile gamers. Since then, it has brought players a smooth and comfortable gaming experience with its modern and sophisticated design close to ergonomics. Now through the Xbox Design Lab service, every gamer can easily design a personal controller, create an exclusive logo for their Xbox gamer identity, and express their different selves by connecting more closely to their gaming experience.

Xbox Design Lab allows players to customize the color matching of all parts of the wireless controller, providing more than 20 colors for players to freely match the controller’s front body, back shell, bumper keys and joysticks, and can also be designed with metallic luster. It is applied to the launch key and direction key, while the grip and ABXY, share, capture and other keys also provide different options for players to choose. In addition to the colorful color options that allow players to play with billions of combinations, the Xbox Design Lab also offers an add-on laser engraving service that allows players to engrave their name, Xbox gamertag, or any text with personal meaning on the controller!

In addition to being able to customize the color of all accessories, Xbox Design Lab also offers a variety of exclusive design wireless controllers for players to choose from. It includes a special style designed with the flags representing 34 LGBTQIA+ groups intertwined, expressing the importance and respect Microsoft Xbox attaches to various groups, and continues to be committed to creating a diverse and inclusive gaming platform. Many popular games have also been the inspiration for the Xbox Design Lab, whether it’s the playful candy-colored design inspired by Fall Guys, or inspired by Crusader Kings III and “Fall Guys.” Cool and handsome styles inspired by Destiny 2 can add a touch of flavor to players in different game sessions! And all the exclusive designs are more open for players to adjust freely, and players can directly embellish their personal style on the existing styles!