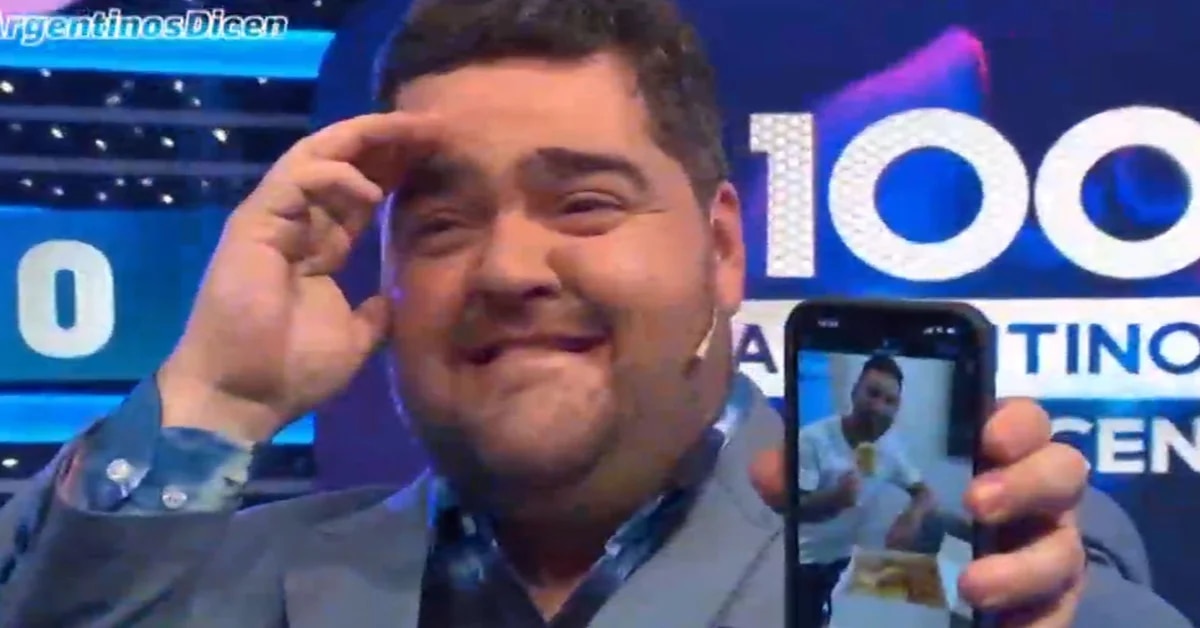 From time to time, Dario Barassi has been sharing a series of messages with Lionel Messi y Antonela Roccuzzo. It all started when the driver of 100 Argentines say He sent a message to the footballer to greet him on his birthday and his wife replied with a funny message, since he had confused the date. The thing did not end there, and the actor sent him a series of gifts that Rosario had especially requested.

This Thursday, the exchange added a new chapter that motivated Barassi’s joy. It all happened at the beginning of the entertainment program, when the driver was exultant, with the cell phone in his hand and ready to share something with the audience. He brought the cell phone close to his ear, pressed play and on the other side the unmistakable voice of the star was heard. “Well, there I sent you the photo of the test. Thank you so much for the present. To you and all the production. We send you a big hug and thank you very much for the detaile”, Messi pointed out to the astonishment of the driver.

What was the footballer referring to? Because the production of the cycle of El Trece had sent them, at the request of his wife, some invoices stuffed with dulce de leche, a picada with a wide variety of cold cuts, butter croissants and others with ham and cheese. On that occasion, Antonela had thanked them through some Instagram stories which motivated an energetic reaction from San Juan: “SI am a friend of Anto and Leo. I’m a friend, do you understand what I’m saying? I am friend. Envy me, brother, in my life I kicked a ball”.

Darío Barassi showed the message that Antonela Roccuzzo and Lionel Messi sent him after the birthday date was confused (100 Argentines say. El Trece)

Now, his effusiveness multiplied to the captain of the National Team about to eat one of the croissants in question. First, he clarified that he “is on a regimen”, since he is currently in full preseason with Paris Saint-Germain. “Well… we’re going to eat something”the Rosario was allowed to say goodbye with another pampering for the driver: “A big hug! Bye, friend, see you!”closed the crack.

Immediately, “Friends will be friends” began to play in the background, the Queen anthem that is synonymous with friendship. Barassi showed the photo of Lionel about to eat the croissant and repeated in disbelief and shouting what he had just heard. “Bye, friend! Bye, friend!”He pointed looking at the camera. The message was celebrated as a goal, and Darío embraced the production, dressed in Messi masks, and posters that said “Anto and Leo are our friends.”

In mid-May Darío had revealed a hilarious chat he had with Messi’s wife. “Have I already told here that Antonela Roccuzo sent me a message on Instagram?” He had asked. And she detailed: Oh, no, my audio with which I answered… I’m going to tell it every time you name it, guys. She sent me a photo showing her foot, a bit of Lio’s foot, and me in the background. And she tells me: ‘We, here, bank you’. And I was driving and I couldn’t think”.

Then, with a particular voice, he imitated the audio that he sent him in response: “’They are a model family, they are an example of a family for the country.’ And she says to me: ‘Hahaha, genius’. And I: ‘I really tell you’”. “You make me ashamed”, one of the producers of the television program was heard saying. The thirteen. To which the host replied: “A bowl…I was embarrassed too. Because I am zero cholulo, but good ”.

China Suárez issued a strong warning to Rusherking’s friends
Melody Luz, Alex Caniggia’s girlfriend, revealed her relationship with Mariana Nannis and Charlotte
Matías Defederico said that it is not enough to pay the food quota: the ironic response of Cinthia Fernández

Aloe vera smoothie with lemon to lose weight: this is how it is prepared