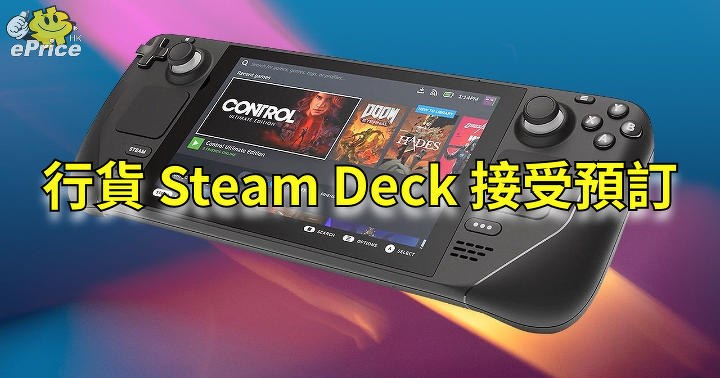 The Steam Deck portable game console released in February this year attracted the attention of many players, but unfortunately it has not been listed in the Asian market. A group of interested players have to rely on parallel importers or purchasing agents, or through teaching in the market, and learn from the United States on their own. Order to get started. Now that Steam has finally announced its listing arrangements in the Asian market, Hong Kong and Taiwan will buy Steam Deck licensed products before the end of the year.

A deposit is required to be shipped first in Japan

Valve, the parent company of the game platform Steam, announced that it has cooperated with Komodo, a Japanese game developer and publisher, to coordinate and sell Steam Deck in the Asian market. From now on, consumers can pre-order Steam Deck through Komodo’s website, which is available in Japanese, Korean, main title and simplified Chinese for customers in different regions to purchase. It’s worth noting that pre-orders will be required to pay a deposit, which will be used to deduct the purchase price, and will be shipped first to the Japanese market, and then to customers in Hong Kong, Taiwan and South Korea in the following weeks.

Neither Valve nor Komodo have stated an actual shipping date, but the pre-order page mentions that customers who pre-order will receive an email when it is in stock, and that they need to complete the purchase within 72 hours, and each customer is limited to one purchase. Like the Steam Deck released in the European and American markets, consumers can choose 64GB, 128GB and 512GB storage versions, and the Hong Kong region is priced at HK$3,288, HK$4,388 and HK$5,488. Valve stated that it has cooperated with Komodo for many years, and decided to hand over the Steam Deck to the other party to be responsible for the sales in the Asian market. At the BitSummit held in Kyoto on August 6th and 7th and the Tokyo Game Show held in September, Komodo will display the Steam Deck for viewing. to try out new games developed by Komodo.

Decathlon has the best mattress for camping