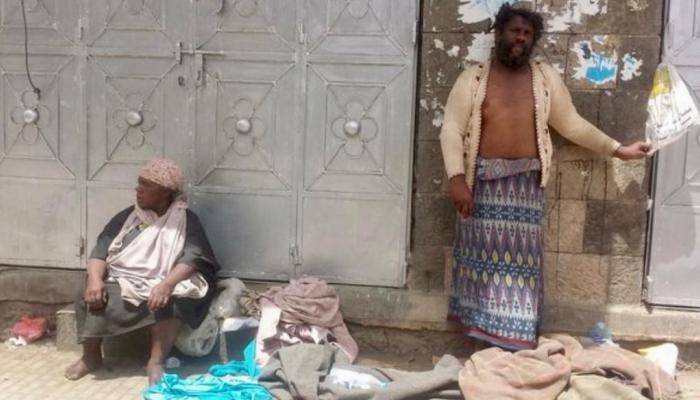 Yemenis living in areas under the control of the Houthi militia face difficult living conditions as well as social and financial pressures.

These conditions caused an increase in the number of people suffering from various mental illnesses in these areas.

Most of the cities whose streets, alleys and lanes are filled with mental patients is the Yemeni capital, Sana’a, as it was the city that housed the largest state institutions and was the city that embraced the most human gatherings at all, compared to other Yemeni cities.

According to testimonies obtained by Al-Ain Al-Akhbar, the number of people with psychological conditions has increased remarkably recently, some of whom were arrested and tortured in the prisons of the Houthi militia.

But most of the injured, according to the sources, are victims of the deteriorating living conditions, the decline in job opportunities, and the Houthi militia’s refusal to pay the salaries of state employees for years.

Among these patients, university graduates whose dreams collided with not getting a job, but the important thing in this is the inability of their families to provide the necessary support due to the difficult financial situation that limits their ability to refer the patient to a psychiatrist, as well as to buy medicines that are usually prescribed It is the most expensive.

Salem Abbas, a resident of the Yemeni capital, told “Al-Ain Al-Akhbar” that the difficult living situation and the obstruction of the prospect of obtaining any work is what led to him in a bad psychological state, like many others.

Among the injured are employees who used to work in state institutions and have not received their salaries for years, in addition to facing various types of torment caused by difficult living conditions and threats of eviction from their homes.

In addition, the majority of state employees who belong to other governorates are unable to move to their hometowns in the liberated cities, as a result of their difficult reality, which forces them to stay under duress under the impact of need.

Abbas points out that those who enjoyed a degree of luxury and then found themselves unable to meet the requirements of normal life remain under the influence of blame, as if they are failures unable to earn a living for their families or find alternatives to get them out of the living predicament they are suffering, as happened with him.

It is not only Sanaa whose residents suffer from severe psychological problems, as this situation also affected the people of Taiz, which has been besieged for seven years, as well as Hodeidah, where its residents live in an unbearable free hell.

According to the Yemeni psychiatrist, Muhammad al-Qudsi, for “Al-Ain Al-Akhbar”, the incidence of hallucinations, shocks, disorders, depression, phobias, phobias and schizophrenia are all psychological diseases that have increased in an unprecedented manner during the war.

He explained that children are among the most affected groups as a result of the artillery attacks launched by the Houthis on residential neighborhoods, in addition to the injury of many due to the loss of their loved ones, the head of the family, or arrests, in addition to blocking the doors of livelihood, unemployment, deprivation of salary, difficult living conditions and social repercussions following the prolongation of the war.

Fahmy Hassan, professor of psychology at the University of Hodeidah, agrees, who said that the deterioration of living and economic conditions greatly affects a person’s mental illness, and extreme poverty leaves psychological scars that do not heal easily.

He added to “Al-Ain News” that some can overcome psychological problems through social relations and search for appropriate solutions to the problems, but these strategies lose their effectiveness with the continued deterioration of living.

He stressed that when an individual finds himself unable to find a solution to his financial and living problems, his psychological condition worsens, and he becomes vulnerable to mental illness and falls into his clutches.

In addition, more than 5 million Yemenis have been psychologically affected by diseases, including severe phobias, phobias and unrest, since the Houthi militia launched the war in late 2014, looting salaries and throwing thousands of people to the unemployment sidewalk, according to international reports.

A big happy surprise.. Detonated by the famous fortune-teller Laila Abdel Latif: The poorest Arab country will become richer than the Emirates and all the Gulf states… You won’t believe who it is! !