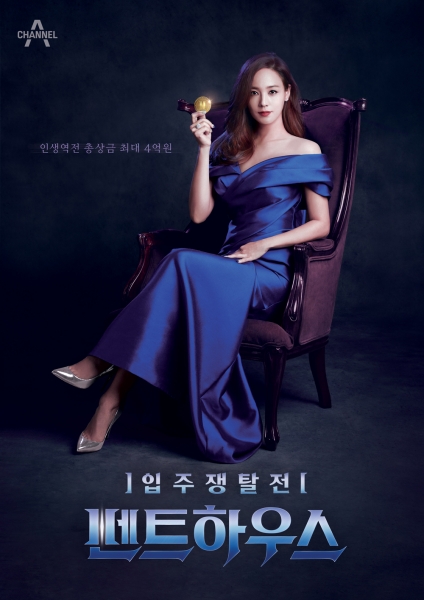 Channel A’s new survival entertainment program ‘The Battle for Move-in: Penthouse (hereinafter Penthouse)’ presents a competition for survival to the top floor with the guidance of Master Eugene. Nancy Lang, one of the tenants, shed tears that she had never shown anywhere while trying ‘Penthouse’, heralding an unpredictable drama that would take place in front of ‘Money’.

Channel A’s ‘Battle for Tenancy: Penthouse’ released a poster and preview video of Eugene, the heroine of the drama ‘Penthouse’ series and the host of ‘Penthouse’ on the 31st. In the poster, Eugene, holding a flashing gold coin, proudly proposes a ‘war for moving in’ with the phrase ‘Life-changing total prize money up to 400 million won’.

In the trailer, Eugene reveals for the first time a five-story abandoned building in Danyang, North Chungcheong Province, which will be the background of ‘Penthouse’. In this special building, movement is possible only with a ‘transparent elevator’, and the owner of the 5th floor ‘penthouse’, which is absolute power, changes through unpredictable missions every day. The most luxurious and luxurious 5th floor ‘Penthouse’ is the pinnacle of desire, a symbol of wealth and power, and a place where you can win a total prize of up to 400 million won. Ten-day fierce competition for tenants will be waged on this ‘penthouse’.

One of the tenants, Nancy Lang, experienced ‘a series of super-tensions that she had never experienced in her life’ here, and eventually shed tears. Residents, including Nancy Lang, poured out unusual feelings while carrying out the mission at ‘Penthouse’: “It is the worst moment of my life that I will never forget”, “I will never forgive myself”, and “I keep crying for no reason”.

However, a surprising reaction also coexisted, saying, “If season 2 comes out, I will definitely appear.”

Previously, ‘Penthouse’ posed a heavy question through the teaser video, ‘Will your conscience be protected in front of money?’ Also in the preview, Master Eugene asked, “How many floors is your life?”, making us wonder what money and desire for the top floor will look like in the battle for occupancy in ‘Penthouse’.

Channel A’s ‘Battle for Tenancy: Penthouse’, which drew attention with the freshest format among K-survival that is captivating the world, with a total prize money of up to 400 million won, is scheduled to be unveiled soon this summer with Master Eugene.

“Kirby of the Stars” A user who claims to have “excavated” the image of the phantom “GameCube version” appears. 2005 E3 site?-AUTOMATON