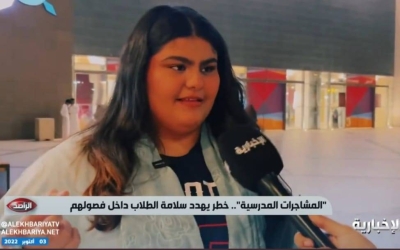 Al-Marsad newspaper: Al-Ekhbariya channel published a report on the quarrels between male and female students inside schools.

A student said, that many quarrels occur inside schools, and amount to stabbings.

She added, a student: “Speculations happen once, and they reach the courts.” Another continued, “A student beat her friend until her hair fell out.”

A student explained that she was bullied because of her weight, and she continued, “They said we didn’t want you here, and they ripped my blouse and beat me.”

In the same context, the channel’s announcer explained that according to the statement of the National Committee for Childhood, 42% is the percentage of bullying in girls’ schools, some of which have reached the courts.

He pointed out that at the beginning of the current academic year, one of the students suffered a fractured skull as a result of his colleague’s assault on him in a school in Riyadh.

An opinion poll by Musk angers the Ukrainians, and Zelensky responds